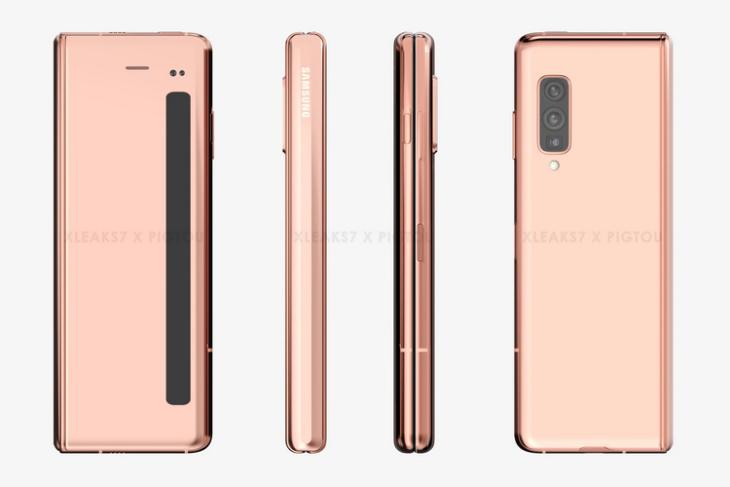 After the botched launch of the 1st-gen Galaxy Fold last year, Samsung is all set to unveil its successor on August 5. A slew of leaks over the past few weeks have revealed several key aspects of the upcoming device. And now, a few leaked renders might have given us a look at what it might look like.

According to a one of the renders, the Galaxy Fold 2 will come with a punch-hole upfront to house the front-facing camera. The image comes from noted tipster, Ice Universe. It shows that the cutout will have an unusual placement along the top bezel. As can be seen below, the punch-hole will apparently be slightly off-center on the top-right.

At first, I thought the hole location was strange, but then I thought about it carefully. This might be the most suitable location. pic.twitter.com/r0PBtQGkhl

Unusual as it may seem, the actual positioning of the front-facing camera hasn’t apparently changed from the first-gen model. As pointed out by @mdukasa on Twitter, the position remains the same as in the original Fold, but just seems different because of the pinhole.

My theory: The camera lines up pretty well with Fold 1, so Samsung originally blacked out the space on the right of the camera setup! pic.twitter.com/Dbmx91pmmg

Meanwhile, additional renders of the phone published by Pigtou shows an elongated design. Apparently, the secondary screen at the back will be larger than the first-gen model, but not exactly wider. In fact, a patent filing from Samsung suggests that it will be thin 6.23-inch strip with a resolution of 819 x 2267 pixels. It will also have a 60Hz refresh rate.

As for the primary screen, it will apparently be a 7.7-inch unit with a 1689 x 2213 resolution. It will use ultra-thin glass and come with a 120Hz refresh rate. A document from the aforementioned filing also reveals that that the combined battery capacity on the Galaxy Fold 2 will be 4365mAh. That’s similar to the 4380mAh for the original Galaxy Fold.

Samsung Working on a Clamshell Smartphone With Folding Screen: Report