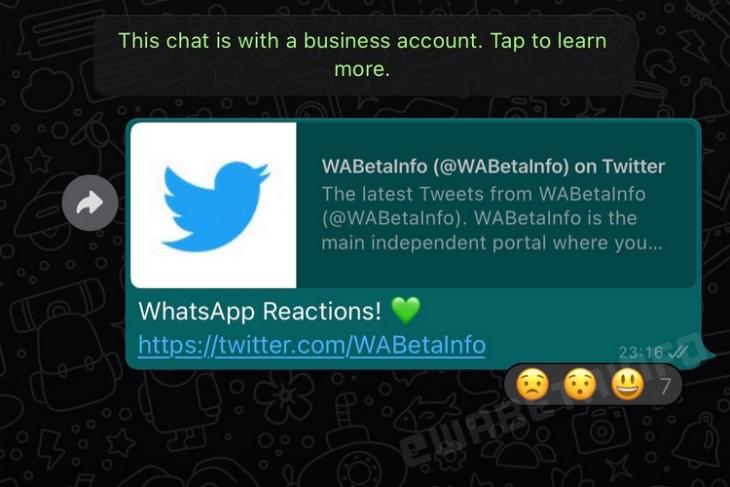 Last week, WhatsApp was spotted working on message reactions. However, when tipster WABetaInfo first discovered the feature, it was not live yet and we didn’t get to see an early preview. That’s no longer the case, as WABetaInfo has now managed to go hands-on with the feature on WhatsApp for iOS. The report also contains a few tidbits on how message reactions would work on WhatsApp.

Interestingly, at this stage of development, it’s possible to react to a message using multiple emojis. As you can see in the image shared by WABetaInfo, one message in a chat with a business account has a total of 7 reactions. However, if I were to guess, it’s highly likely that WhatsApp will limit the number of reactions from a single person in a message to one — just like Facebook and Instagram message reactions.

Moreover, it looks like you can choose between any supported emoji WhatsApp has to offer. This way, you can easily express how you are feeling, unlike Twitter where the emoji react options are limited and you can’t even angry react to messages.

It’s also worth mentioning that message reactions are not anonymous. Everyone in the chat will be able to see who reacted to a message and the emoji you reacted with. Hence, you will have to proceed with caution if you are planning to react to messages in serious group chats.

Going by Facebook’s implementation of message reactions in Instagram, it’s safe to assume that long-pressing a message would bring up the panel with emoji reactions. As of this writing, the WhatsApp message reactions feature is not live on Android or iOS apps, even in the beta builds. We could expect that to change in the coming months as WhatsApp gets ready to roll out message reactions.