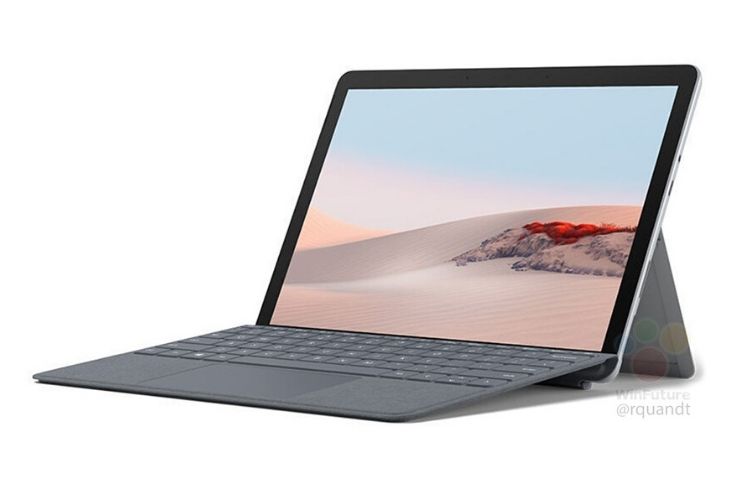 There’s recently been a lot of chatter surrounding the Surface Go 2, an upgrade over Microsoft’s two-year-old tablet PC. Surface Go 2 passed through FCC last month and gave us a sneak peek at some of the upcoming device’s key specifications. Now, well-known tipster Roland Quandt (via Winfuture.de) has today shared official marketing images of the Surface Go 2.

The marketing images gives us a quick look at the upcoming design changes. The most prominent being a bigger 10.5-inch display with a higher resolution of 1920 x 1280 pixels as compared to the 1800 x 1200 pixel resolution of the original. The body of the Surface Go 2 remains unchanged, so the bigger display translates to narrower bezels.

The existing keyboard cover will work with the Surface Go 2 but Microsoft is rumored to launch four new colors, namely Ice Blue, Poppy Red, Platinum, and Black for the cover.

Apart from the design, we have also learned some of the key specifications of Surface Go 2 today. A recent leak suggested that Microsoft will incorporate the Intel Pentium Gold 4425Y and Core m3-8100Y processor in its upcoming tablet. And it seems to be true as Quandt has also talked about the same change under the hood. 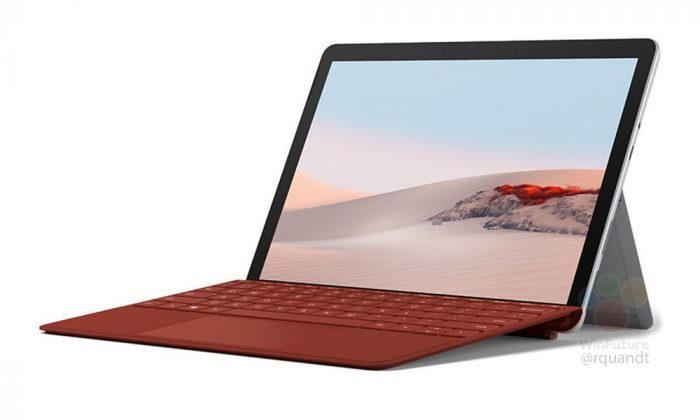 While the former, dual-core Intel Pentium Gold 4425Y processor, is a minor upgrade over the Pentium Gold 4415Y on the previous Surface Go, the Core m3 configuration will be introduced for the first time. These are low power entry-level processors, so do not expect a huge performance bump.

Further, the Pentium variant is rumored to sport up to 8GB of RAM and 128GB of flash memory at launch. There is no word on the Core m3 configurations just yet.

The biggest upgrade will most likely be on the software front. The original Surface Go launched with Windows 10 in S Mode. It’s a locked version of Windows 10, which only allows users to install apps from the Microsoft Store for security purposes. We do have an upgrade in the form of Windows 10X available to us now, so could Surface Go 2 be the first commercial device to run this new version of Windows?

If you recall, Microsoft recently refocused its plans for Windows 10X. It said Windows 10X will first debut on single-screen devices ahead of its foldable device launch. So, it’s possible that Microsoft might debut Windows 10X on an in-house device. FCC listing, however, suggests that it will run Windows 10 Pro out-of-the-box.

Surface Go 2 and Surface Book 3 will be introduced at a Surface event over the coming months, as per the blog post, so stay tuned for more information.