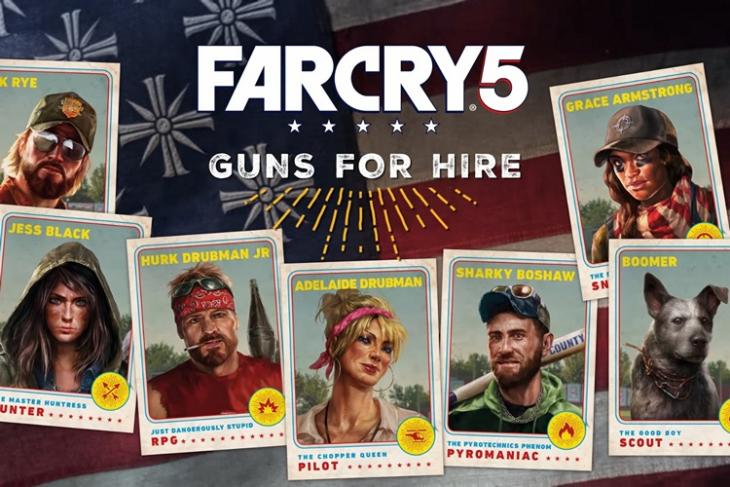 Alongside Final Fantasy 7, Borderlands 2 and Red Dead Redemption 2, the upcoming Ubisoft game, Far Cry 5, is definitely one of the most-awaited titles this year. The game will be released on March 27, 2018 on PC, Xbox One and PS4, and Ubisoft’s marketing machinery has already been working overtime, releasing a story trailer with Season Pass details earlier this month. Thanks to the E3 2017 Gameplay demo, we also know that it will have a, well … “testicle hunting” mission. Yes, awkward, uncomfortable, and simply weird.

Another interesting thing we learnt at E3 2017 was that the game was going to introduce a number of ‘Guns for Hire’ to help players in their quest to keep Hope County, Montana, free from the clutches of the evil cult. However, it’s only now that Ubisoft has released the trailer that acquaints fans and gamers with each of the characters individually. They all have unique skills and backstories as to why they’re risking their life and limbs to fight the cult.

First off, you have Nick ‘King of the Skies’ Rye, who is a pilot. Then, there’s Grace ‘Sharp-Shooting Hero’ Armstrong, who’s a sniper and former soldier. Sharky ‘Pyrotechnics Phenom’ Boshaw is a pyro-technician, while ‘Master Huntress’ Jess Black is a dead-eye archer. There’s also a mother-son duo thrown into the mix: ‘Chopper Queen’ pilot Adelaide Drubman and her RPG-wielding son, ‘Dangerously Stupid’ Hurk Jr. While the latter can ‘barely zip his own fly’ (Ubisoft’s assessment, not mine), his mom apparently has more grey cells, and goes about her job with zeal, mounting a pair of .50s to her helicopter.

Finally, the part I loved the most about the trailer – the three ‘Fangs for Hire’. Yes, man’s best friend is represented in Far Cry 5, with Boomer ‘The Good Boy’. However, cat people need not despair either, because you also get ‘The Feline Powerhouse’ Peaches. Last but definitely not the least, there’s also a gigantic grizzly called Cheeseburger who’s apparently expected to help you in your quest against the cult. Outlandish? Welcome to the Far Cry, y’all.