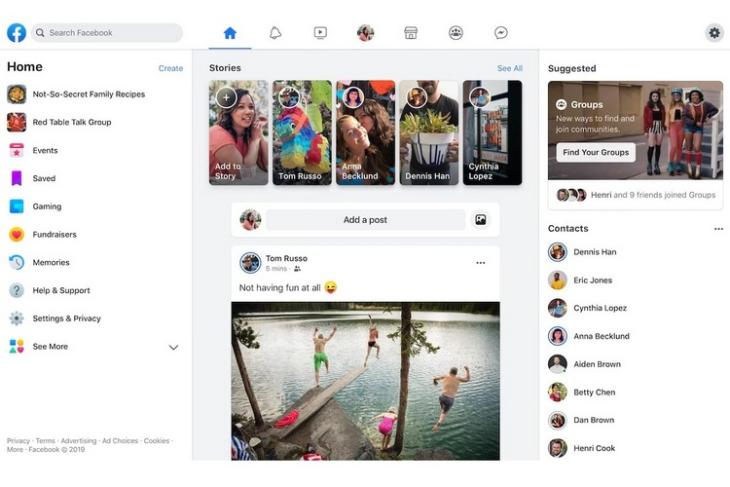 Almost a year after teasing the new and improved user interface of its desktop website, Facebook has finally started rolling it out to a handful of users. According to a new report from CNet, the company has already confirmed the development, saying that it plans to release the new UI to everyone before this spring. Given that spring officially starts March 19th in the US, one would expect to see the new design rolled out universally within the next couple of months.

Originally demoed last April by Facebook founder and CEO, Mark Zuckerberg, the new design has a less cluttered look and brighter icons. Being referred to as ‘The New Facebook’ by the social media giant, it also contains a Dark Mode option that the company has been a/b testing at least over the past few months.

According to CNet, users who are being offered the new interface are being shown a pop-up, asking them if they’d want to test drive it before everyone else. Users wanting to keep using the old UI can simply choose to do so, while folks who opt for the new design will be offered the option to set the background color to either white or black.

The change comes at a time when Facebook is still reeling under multiple allegations of privacy violations and persistent complaints about fake news on the platform. On its part, the company claims it is taking all steps to make the platform a safer and more agreeable place for users, so it will be interesting to see if the new UI and the ‘New Facebook’ branding will do anything to reassure privacy-conscious users that the company has really changed for the better.