Twitter is undoubtedly one of the most popular social networking platforms on the web, especially if you’re looking to carry out a conversation around a topic. With close to 330 million monthly active users, Twitter is one of the biggest social media platforms. The only problem that I have with Twitter is its official app. If you use the official Twitter app you might be missing out on a lot of features. While the official app is no slouch, it lacks the customization options and pro features. Thankfully, there are a number of good third-party Twitter clients for Android and iPhone that bring new features, customization, and better performance. So, if you are a Twitter power user, here are 12 best Twitter apps alternatives you should definitely check out in 2020.

Note: Before you buy any of the third-party Twitter apps mentioned below, you should know that Twitter has officially overhauled its API which now restricts third-party apps from accessing many of its features like group direct messages, polls, Twitter bookmarks, and more. Keep that in mind, before making any purchase.

Before you get to our list, you should check out our article on best Twitter tips and tricks. They will help you get the most out of this platform. With that out of the way, lets see the apps, shall we?

If you’re an Android user and aren’t satisfied with the performance of the official Twitter app, then you can check out the Twitter Lite app as it’s one of the best and feature-rich alternatives for it. Twitter Lite renders you the same UI, with the option to switch to the night mode, along with all of the key features such as bookmarks, Moments, and more in a compact and lightweight package. 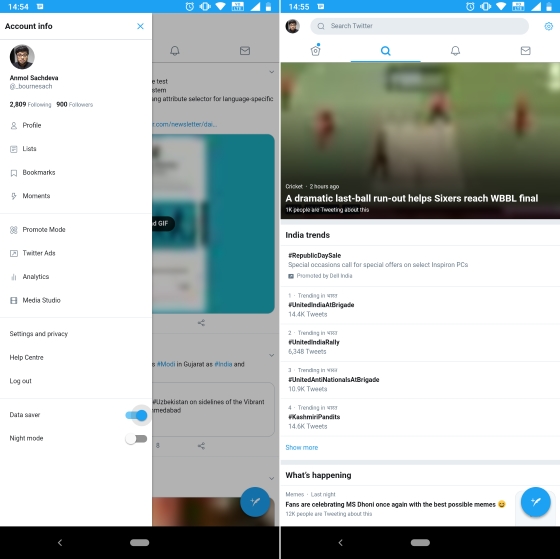 Twitter Lite weighs only about 2.5MB upon installation as compared to the 60MB official Twitter app. The app cuts down on the clutter, animations, and unnecessary features in your official app to offer you a streamlined experience like none other. The only missing feature here is multiple account support and it’s something casual users would not really care about – whereas power users should keep reading on.

Fenix is the most popular Twitter client and it has held the crown for quite long. However, Fenix is no longer available on the Play Store and its successor, Fenix 2, has now taken its place. What’s even better? Fenix has also made its way to iOS devices as well, so you can enjoy a clean, clutter-free (ad-free, and feature-packed experience on your iPhone too. 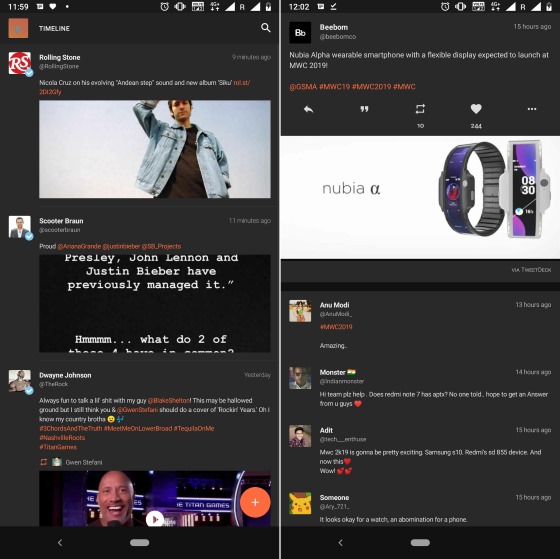 It sports a swipe-based navigation UI, multiple themes, chronological timeline (if you’ve not received the official update yet), and the ability to customize your experience as per your needs. You can even find trends, bookmarks, multi-account support, and additional features such as muting, multiple drafts, clickable timeline links, image & video previews on the timeline, an internal browser with Readability support, and more

Tweetbot is one of the most popular Twitter clients on iOS and macOS simply because of all the goodness it packs inside. The app was bumped up to Tweetbot 5 and received an overhaul towards the end of last year, along with the addition of a new dark mode, GIPHY support (with auto-playback), and more. Tweetbot 5 obviously integrates a number of third-party services for videos, images, read later functionality, and timeline sync to make your Twitter experience amazing. 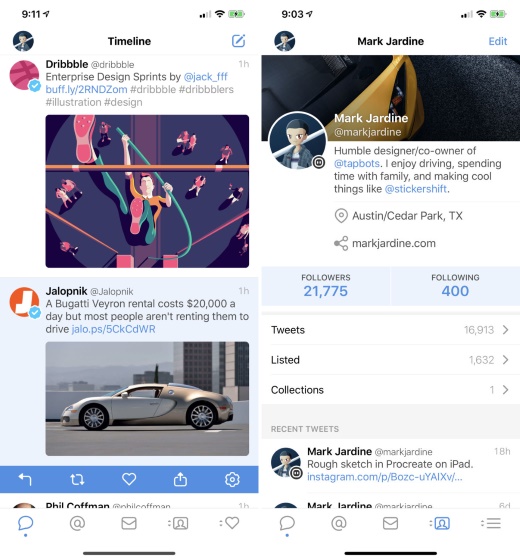 If you’ve been a regular user of Tweetbot on your Mac, well, the iOS app now offers an experience closer to the same. It even shows if someone follows you or not right in the tweet view, iCloud sync to remember your read position, and a feature that I use more often than not – profile notes. Tweetbot 5 lets you add private notes to profiles to help remember why you followed someone and it’s features like these which make it worth every penny.

There may be a plethora of Twitter clients on Android ,but Owly, which is fairly new to the party, is also trying to grab a spot among the most recommended ones. The app offers a clean and intuitive experience, with a card-based UI and a bottom navaigation bar for quicker acess. You get instant access to media previews and actions for user profiles. Owly has also supercharged the tweet creation process and made many customizable templates available to help express yourself more easily. It adds to your 280-character limit and that’s excellent for someone who has a lot to say. 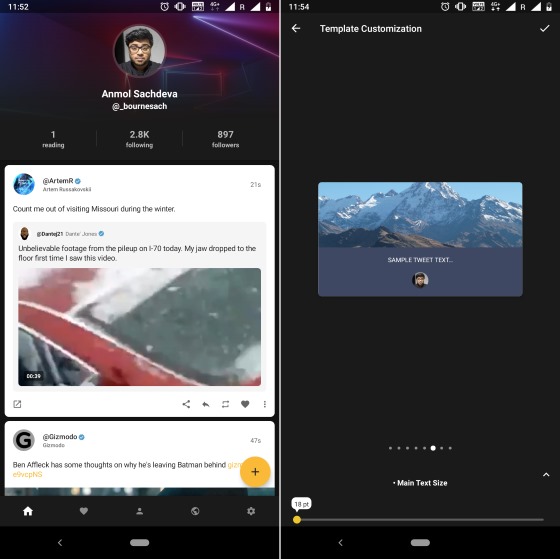 The one thing that confuses me about Owly is that it constantly shows your profile card right at the top of each pane. I don’t understand its true purpose as it only gives you a panic attack, looking at your follower count all the time. The best feature of the app will, however, have to be Tweet Digest, which delivers you the latest news from users you’re interested in hearing from. It’s locked under a $2.99 Pro subscription though.

Twitterific 5 is another fine Twitter app for iPhone and iPad users. The elegant looking app brings features like live streaming on the timeline, ability to mute tweets by users, hashtags or URLs, list management, voice over support and more. There are tons of customization options too. In the theme panel, you can switch between different themes, customize avatars, fonts, image thumbnails and more. Also, there’s an option to automatically enable the dark theme at night. 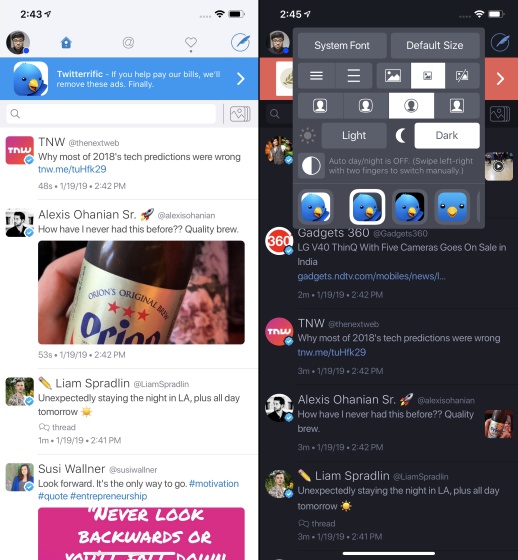 While the free version of the app brings the aforementioned features, it lacks support for push notifications, which can definitely be a deal breaker for people. However, you can get push notifications and other premium features like tweet translation via in-app purchases.

Talon is one of the most popular and feature-rich Twitter apps out there. It brings a great mix of unique features and enhanced performance to the table, including features such as
“peek” into profiles, images, GIFs, and videos without ever leaving the timeline. The app also lets you receive notifications for favorite accounts and lets you mute tweets by users, hashtags, retweets, Twitter clients and expressions. Other features of the app include do not disturb mode, compact timeline layout, the native playback of most media types including YouTube videos, and more. 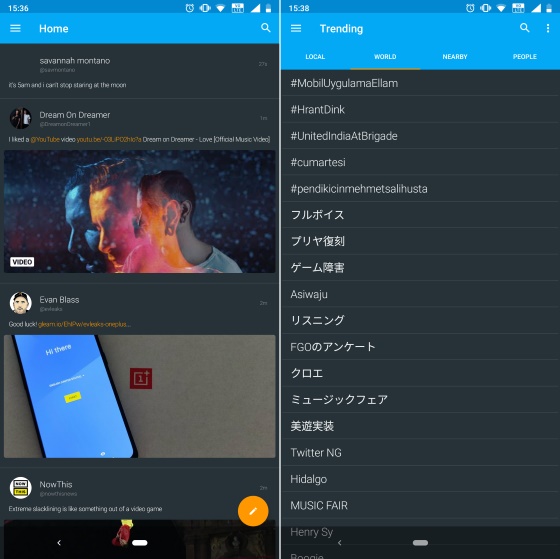 Along with the cool features, you can even customize the app’s swipe-friendly pages and customize the look of Talon with the Material Design theme engine. You can choose from light, dark or black theme, the accent color, and more. The app was once free and you’ll only have until the refund time to try it out.

Tweetlogix is one of the best third-party Twitter clients for iOS users. Not only the app features a good design but it also brings a boatload of features. My favorite feature of Tweetlogix is powerful filters. You can remove distracting tweets by muting users, keywords, phrases, retweets, and clients. I also love the timeline view on Tweetlogix. It’s far better than the official Twitter client and brings features such as inline images, auto-expansion of long tweets, gap detection, and much more. You also get swipe gesture support for actions and multiple themes for customizing the look. Finally, I like that it’s a paid upfront app so you are not incurring any hidden charges. 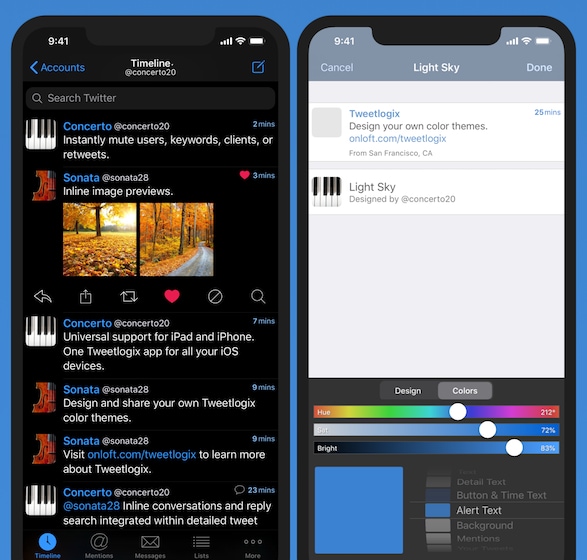 If you are looking for a lightweight Twitter client for Android, download the TwitPane app. It offers more customization options than the official Twitter app. You can create customizable tabs, add multiple Twitter accounts, upload photos and videos while Tweeting, and more. The user interface looks a bit outdated, but it’s quite functional. The tweets are readable and it displays even larger tweets without any problem. Other standard features like creating saved searches, retweeting, creating lists, and more are also here. Overall, this is a capable Twitter alternative for Android. 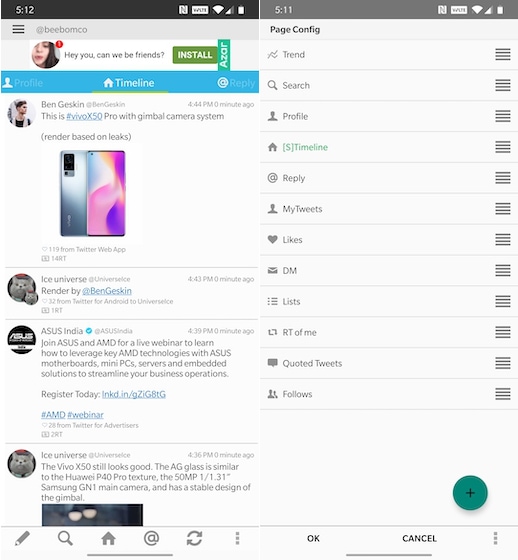 Friendly for Twitter is based on Twitter’s mobile website. It’s very lightweight, doesn’t drain the battery, and brings a fast-loading experience. I love that it lets you easily download GIFs, videos, and pictures that are shared in tweets. It’s also customizable. You can change the theme and color schemes. It also supports multiple Twitter accounts and blocks all the sponsored Tweets by default. If you are looking for a lightweight Twitter client, you can check it out. 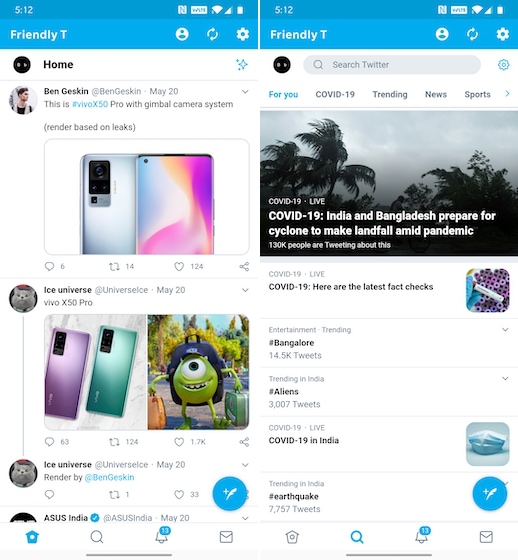 Twidere is the app you should use if you want a fast performing & fully customizable Twitter experience. Firstly, the app looks great with its minimal interface, plus it’s fast and sleek. Then, there are the plethora of customization options. You can customize the look of the app with a light or dark theme or background and can even change the fonts and colors. Moreover, you can customize tweet cards, with the addition of a number of different custom tabs. 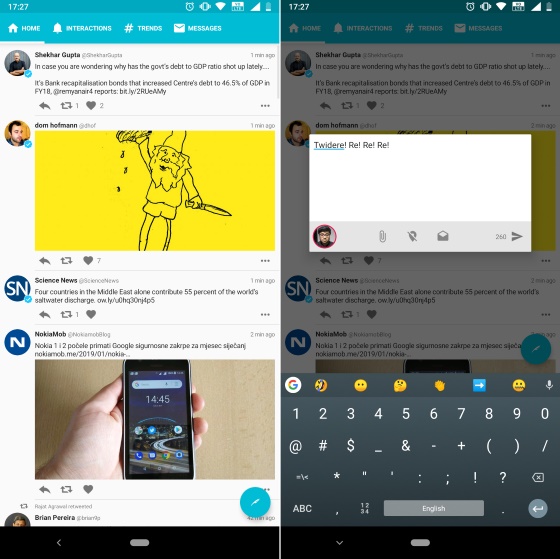 This open-source Twitter client packs plenty of additional features as well, like keyboard shortcuts, support for tweet shorteners & extensions, configurable share formats, drafts, bandwidth saving mode, powerful filters, and more. You will, however, have to shell out money to get data sync, GIF sharing, advanced filters, and other features.

If you want a free, customizable Twitter app for your Android smartphone then Plume is a great option. Plume lets you customize the experience by theming – not only the look and feel but also user tweet colors (which may look funky at first), different sections, reverse Timeline, and more. Plus, all the different sections are available at swipes, making the UI quite easy to navigate. Other than that, the app brings support for live streaming from the timeline, muting users, apps & words from the hamburger menu; internal browser, link shortening support, inline conversations, scrollable widgets and a lot more. Here, you can also add your Facebook account to see its timeline and post updates within Plume itself. 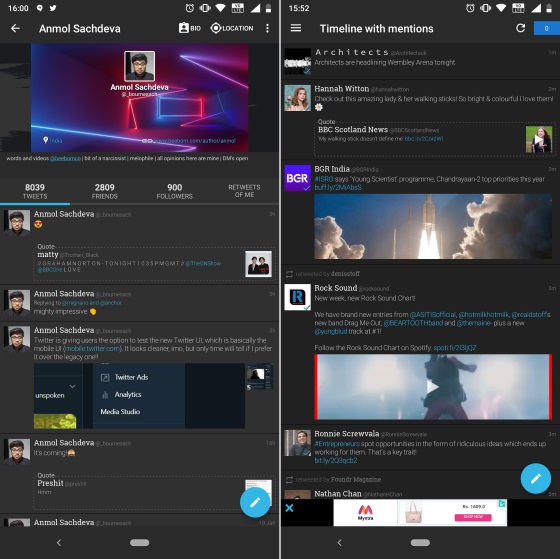 Want a light and customizable Twitter app with a lot of features? Well, Tweetings is an app that brings the best of both worlds. You can change the look of the Tweetings app on the go with 38 beautiful material design themes, 19 dark and 19 light, plus there’s the builtin theme builder too. The app also brings features such as a stacked timeline, which lets you view tweets grouped by followed users. It also features sections that you can add or remove with ease. 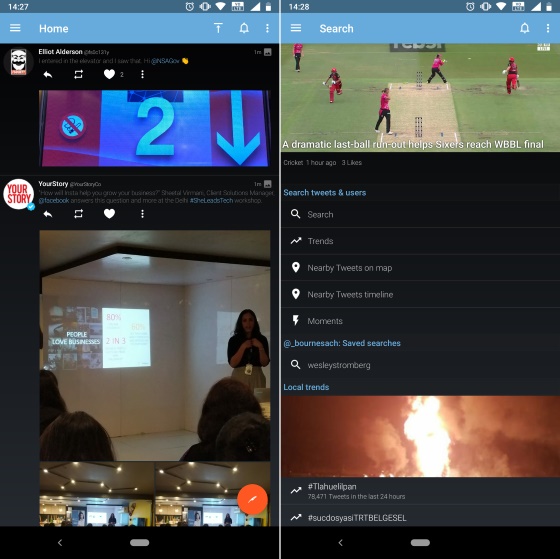 There’s multiple account support, along with robust trends and Moments support in the search section – similar to your official Twitter app. My favorite feature, however, is the handy yet gimmicky ‘use fingerprint authentication to send tweets’ and it works as said. You will have to touch the fingerprint scanner to prove your identity before you can send a tweet.

The official Twitter app, as well as Twitter Lite, should be good enough for most users, but if you are someone who uses Twitter a lot, you should definitely check out one of the apps listed above. The aforementioned third-party Twitter apps bring better performance, more features, customizations, and work great too. So, check out these Twitter apps and let us know your favorite one in the comments down below.