Introduced in iOS 13, Hearing Health is designed to help users avoid being exposed to high levels of sound, especially when wearing headphones for a long period of time. With detailed information about the headphone audio levels over the last hour, day, and week, the health feature makes the process of tracking exposure to loud sound quite straightforward. With iOS 14, Apple has further enhanced it by including the ability to measure volume level of headphones in real-time. Even better, it now lets you automatically reduce headphone audio on your iPhone or iPad running iOS 14 and iPadOS 14.

So, What’s Considered to Be OK and Loud?

While the long-term exposure to sound under 80 decibels is considered “OK”, the repeated exposure to sound at/above 80 is deemed as “Loud”, which could lead to hearing loss. To be more precise, the louder the sound, the less time your ears should be exposed to it.

iOS 14 lets you set the minimum decibel level over which you want the iOS to automatically decrease the sound. Once enabled, it keeps a track of the audio level and brings it down the moment it goes above the set threshold.

This health-feature is said to work with AirPods, AirPods Pro, along with a few other headphones. Apple will support more and more headphones in the future. However, I expect it to work with Apple’s wireless earphones more efficiently, considering the deep integration.

3. Next, tap on Reduce Loud Sounds.

4. Next up, turn on the toggle for Reduce Loud Sounds. After that, use the slider to perfectly adjust the decibel level over which you want the iOS device to automatically reduce the sound. 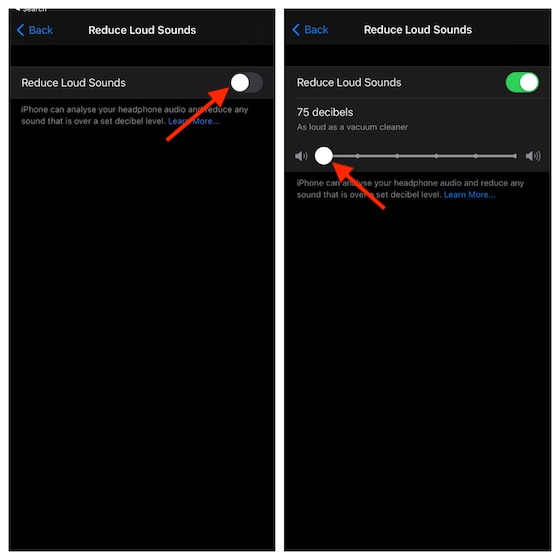 You can choose to set it between 75 to 100 decibels. Once you have adjusted the slider, quit the settings. As mentioned above, make sure to keep the decibel level below 80 to protect the ears.

So, that’s the way you can safeguard your ears when listening over headphones. It can play a good part in preserving your hearing. In the last few years, Apple has introduced a series of defining health features on its ecosystem. Be it the groundbreaking ECG, monitoring heart rate variability or cycle tracking, Apple ecosystem is proving to be enormously helpful for health-conscious people.