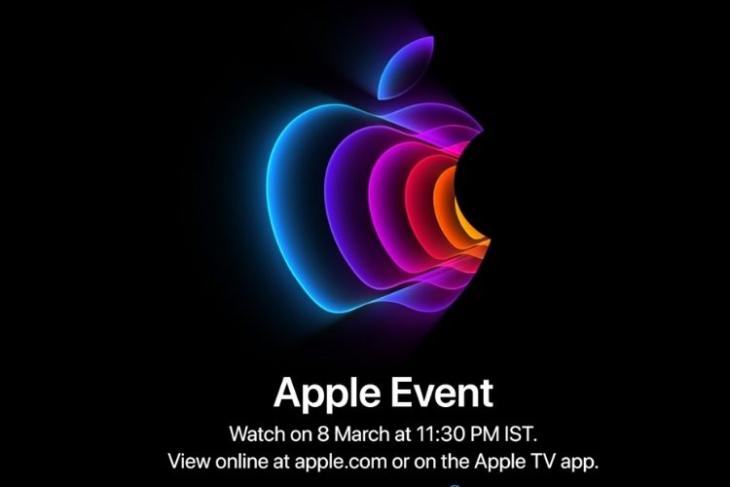 After some wait and numerous speculations, Apple has finally announced its first launch event of 2022, which has the “Peek Performance” tagline. Hence, we can expect some performance-driven devices. The event, much like most events in the past two years, will be an online one. Here are the details to know.

The Apple event will be live-streamed on March 8 from Apple Park and interested people can watch it on the Apple website, the company’s YouTube channel, and even on the Apple TV app. It will start at 10 am PST, which is 11:30 pm IST.

Similar to how most Apple announcements are, this one too has an easter egg. It’s basically a 3D colorful Apple logo that floats in the air and can be best viewed in AR. For this, you can head to the Apple Events page via an iPhone, click the big Apple logo, following which you will see the ARKit AR viewer, and in a few seconds the floating Apple pops up. Give it a shot if this interests you!

As for what to expect from Apple’s 2022 Spring event, the company hasn’t provided any details. But, we have a number of rumors that have constantly hinted at the arrival of the much-anticipated iPhone SE 3 (iPhone SE+ 5G could be a shortlisted name), the new iPad Air 5, and possibly new Macs with the new Apple Silicon.

To give you a brief, the next-gen iPhone SE is expected to come with design elements similar to the iPhone SE 2 but with hardware changes such as an A15 Bionic SoC, improved cameras, better battery life, and more. And how can we forget 5G support, which will make the new iPhone SE the first inexpensive iPhone to have 5G. It could have an affordable price tag too.

The iPad Air 5 is also speculated to be powered by an A15 Bionic chipset, have 5G support, come with camera improvements, and more. There could be the launch of new Macs, along with the next-generation M2 chip too. The rumors have hinted at a total of seven new Macs but we will have to wait for the event to happen for a better idea.

In addition, the iOS 15.4 update could also be announced for the general audience on the same day. Since the event is a few days away from now, it makes sense to wait for all the official details. We will keep you posted, so stay tuned.