Skip to content
Home News iOS 15.4 Beta Lets You Unlock Your iPhone with Face ID While Wearing a Mask 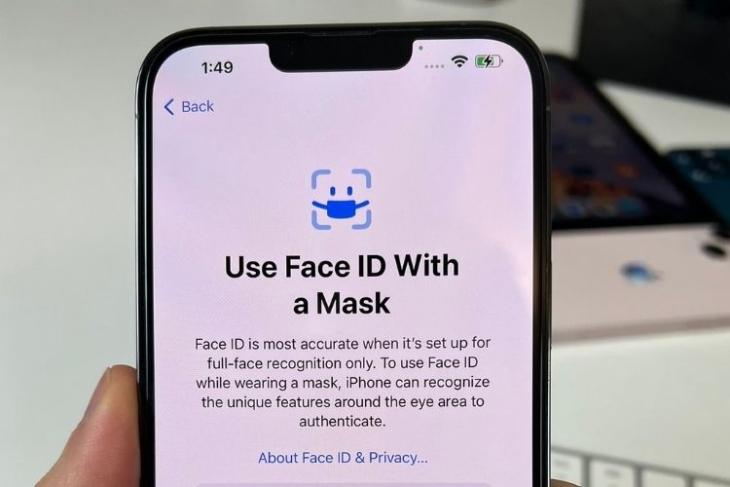 While Apple’s Face ID system has been a revolutionary biometric authentication system for smartphones in the market, the inception of the Covornavirus-led pandemic has made it more or less useless as face masks became a part of our attire. As a workaround to this issue, Apple allowed users to unlock an iPhone using their Apple Watch. However, the Cupertino giant has now started testing a “Face ID with a Mask” feature that allows non-Apple Watch users to unlock an iPhone using the Face ID while wearing a mask.

The feature, initially spotted by YouTuber Brandon Butch, is currently live on iOS 15.4 Beta 1. It enables users to unlock their iPhone with Face ID when wearing a face mask even if they do not own an Apple Watch.

Now, for those unaware, Apple’s Face ID leverages the company’s TrueDepth camera system to recognize the full face of a user. However, with the new feature, Apple says that the Face ID system will be able to “recognize unique features around the eye area” of the users to authenticate the user. However, it seems like users will need to set it up from a dedicated option in the Face ID settings of their iPhones.

As spotted by Butch, there is a new “Use Face ID With a Mask” option under the Face ID settings. The YouTuber shared an image, showing the new option, in a recent tweet. You can check it out attached right below.

Now, it is worth mentioning that this nifty feature is currently in its testing phase as it is only live for iOS 15.4 beta 1 users, and secondly, it reportedly works only on the iPhone 12 and 13 series. Nonetheless, it is a nifty addition for non-Apple Watch users to unlock their iPhones while wearing a face mask.

Coming to the availability, Apple is expected to test the security and reliability of this feature with the upcoming iOS 15.4 betas. Once the company deems it feasible, Apple might roll out the ability to unlock your iPhone with a mask on with the stable version of iOS 15.4 in the coming weeks. So, stay tuned for further updates and let us know your thoughts about the new Face ID feature in the comments below.