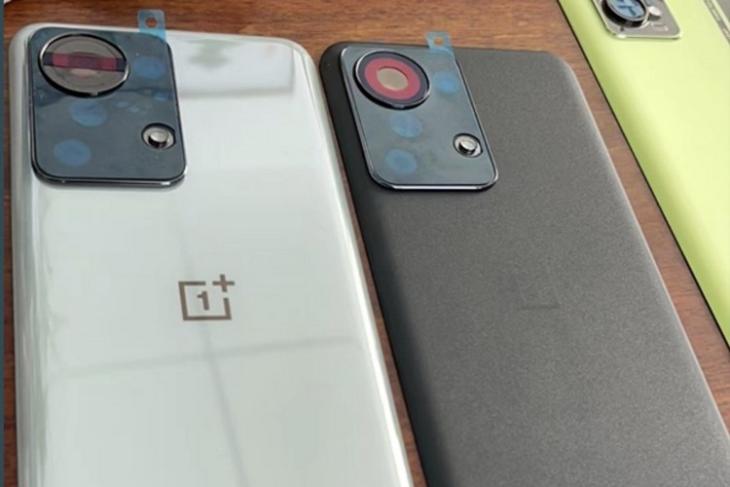 OnePlus recently confirmed that it will release the OnePlus 10 Pro in the global market (including India) by March-end, after launching it in China earlier this year. While the company didn’t unveil the standard OnePlus 10, it is also expected to make its entry soon. So, before details regarding the standard model are made official, a real-life image showcasing the vanilla OnePlus 10 model has surfaced online. It gives us a feeling that the OnePlus 10 exists and will be unveiled sooner rather than later!

An image, showcasing the back panel of the alleged OnePlus 10, recently leaked on the Chinese social platform Weibo. It was spotted by a LetsGoDigital representative and shared with the publication soon after. You can check out the alleged OnePlsu 10 image attached below.

The above image showcases the back panel of two unreleased OnePlus smartphones, lying face-down on a table. While one has a glossy silver back panel, the other one has a textured black back panel, along with the rectangular camera module at the top left.

If one has to believe that this is the OnePlus 10, it clearly isn’t anything like the OnePlus 10 Pro. As opposed to the 10 Pro’s huge camera hump, this one has a cornered-placed rectangular camera island that has a huge camera sensor, which is most likely the primary rear camera. Furthermore, there are two or possibly three smaller cameras visible in the image along with the LED flash. We don’t know much about the display part, but it will most likely have a punch-hole cutout.

As for the specs, not much is known at the moment. But, rumors suggest that it will come with triple rear cameras and the Snapdragon 8 Gen 1 SoC. That said, a report from earlier this year had suggested that the OnePlus 10 could also feature the Dimensity 9000 chipset. The device is expected to come with at least 8GB of RAM and 128GB of internal storage. Plus, it is expected to sport a 120Hz display much like its predecessor, the OnePlus 9. Other details remain under wraps as of now and we don’t know if the device will actually see the light of the day this month.

We will let you know once OnePlus releases some information. Meanwhile, tell us if you think that the leaked image is that of the vanilla OnePlus 10 that the company will launch alongside the Pro-variant in the comments below.