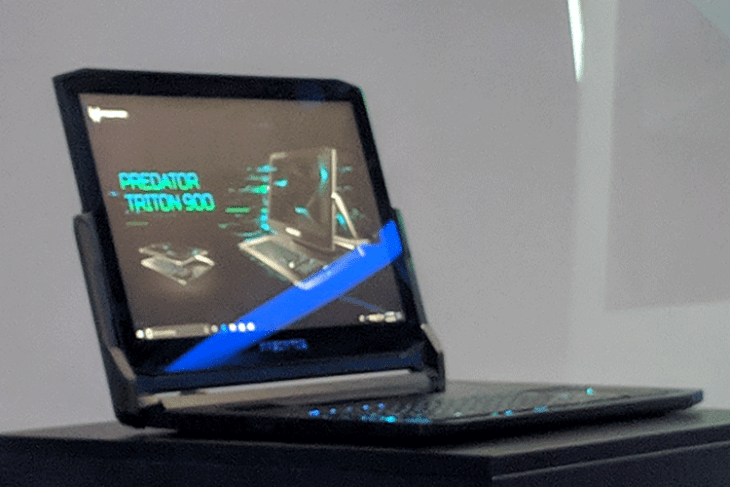 While Windows ultraportables and smaller notebooks have experimented with various form factors and hybrid designs for some time now, you don’t really see the same approach when it comes to gaming notebooks.

That’s what Acer wants to change with the Predator Triton 900, a bold and ambitious take on what gaming laptops should look like, unveiled at IFA 2018. The thing that sets the Triton 900 apart from the rest of the gaming notebooks is the U-shaped hinge which runs halfway along the display’s sides. As a result the display is able to swivel forward for a more up-close and immersive gaming experience for the user. 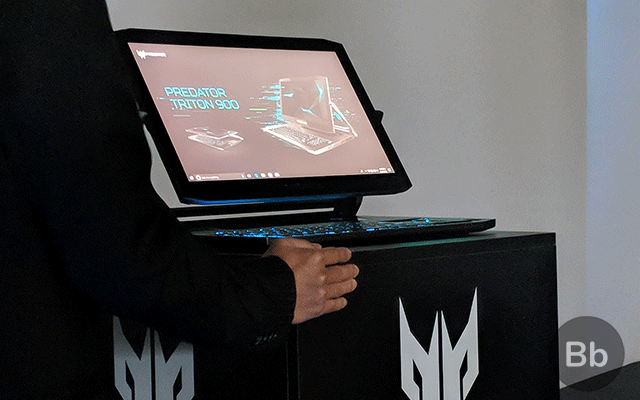 Of course that makes sense in theory but there’s still the big question of whether this is something gamers have asked for. Acer certainly seems to think so and one must credit the company for this brave approach. The company said it wanted to carry forward the tradition of being the first to release unique devices, specifically giving us the example of the Predator 21 X.

Unlike many other gaming laptops these days which are going for a monolith look, the Triton 900 looks like an alien artifact from a sci-fi movie. The side hinges have an aggressive design and the single block construction should keep the screen from wobbling about. We couldn’t of course test the sturdiness because Acer had kept the laptop under a glass case, but the hinge looked quite firm.

Another thing that’s changed in the Triton series is the trackpad, which now sits to the right of the keyboard. Most gamers would prefer to use a mouse, which is why Acer decided to ditch the weird glass-panel touchpad from the previous generation which sat above the keyboard. That result in some hot fingers as the heat sinks were directly under this touchpad. Obviously the new solution isn’t the best either if you use the laptop without a mouse, but it’s certainly better.

While we couldn’t test the keyboard, Acer told us it’s largely unchanged from the last-gen Triton notebook. Once again, the keyboard is closer to the bottom edge than in most laptops, but when the display is swiveled forward, the keyboard placement works very well in creating that immersive feeling.

The keyboard seems largely unchanged from the last gen Triton 700, but the heat management should get a big boost with the Acer Aeroblade 3D technology which also got a revamp at IFA 2018.

Whether the Triton 900 actually manages to kick off a wave of hybrid gaming laptops will depend on its sales. The laptop will only be available in Q1 2019, and by then it might be overshadowed by other gaming notebooks which are expected to come with the Nvidia RTX mobile GPUs.