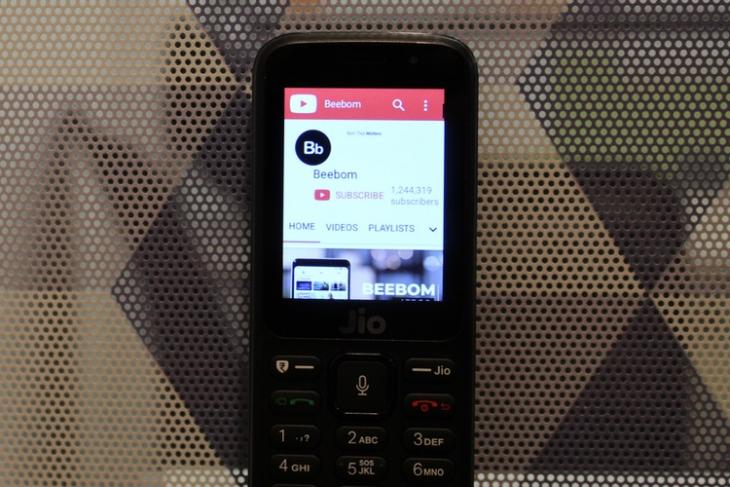 Earlier this month, WhatsApp finally made its way to the JioPhone, and just a week after its arrival, YouTube has now become available on the JioPhone too. The video sharing platform’s KaiOS-optimized version can now be downloaded from the Jio Store on both the JioPhone and the JioPhone 2.

However, navigation is an issue because the cursor moves too slow and apparently, you can watch the videos only in portrait orientation on the JioPhone as there is no way to change the video’s orientation. However, watching YouTube videos on the JioPhone 2 wouldn’t feel that out-of-the-place due to its wider display and different screen orientation, which plays the videos naturally in a wider aspect.

In another news, Reliance will host another sale of the JioPhone 2 tomorrow on the official Jio website which kicks off at 12:00 PM sharp. But tomorrow’s JioPhone 2 sale will be a bit different because interested buyers can now buy the second-generation ‘smart feature phone’ from Jio using their Paytm wallet and can also opt for cash on delivery (COD) as a method of payment. Buyers who pay for the JioPhone 2 using their Paytm wallet will get a flat cashback worth Rs. 200.

The JioPhone 2 features a 2.4-inch QVGA screen with a QWERTY keyboard sitting below it. The device is powered by a 1GHz dual-core processor paired with 512MB RAM and 4GB internal storage (expandable up to 128GB via dedicated microSD card slot). There’s also a 2MP rear camera and 0.3MP front camera on board as well, but the device’s USP is the great collection of apps including Google Maps, Facebook, WhatsApp, and YouTube which significantly enhance its utility.