Just days before launching its selfie-focused Redmi S2 smartphone, Chinese tech giant Xiaomi has teased the device yet again, claiming that it will be the ‘best-ever Redmi phone’ for capturing selfies. The company had earlier confirmed that the device will launch in China on May 10. The Redmi S2 is also expected to be launched as an Android One device in India, as was revealed in an exclusive report by Beebom last week. 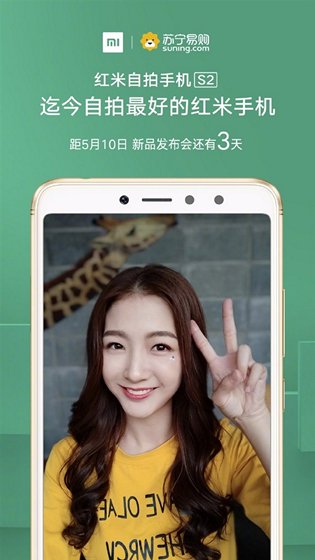 The Redmi S2 is expected to be a budget handset with the ability to click high-quality selfies in all lighting conditions. Earlier leaks have suggested that the front-facing camera on the device will sport Samsung’s 16MP S5K3P8SP sensor. At the back, it is expected to ship with a dual-camera setup, including a 12-megapixel primary sensor and a 5-megapixel secondary sensor.

Both the front and rear cameras on the Redmi S2 are said to be assisted by Artificial Intelligence (AI) not only to implement the Portrait Mode, but also for the Beauty Mode. While the former lets users capture bokeh shots that blur all background objects to focus on the foreground subject, the latter can be used to beautify portraits by removing blemishes etc.

Taking a quick look at its hardware specifications, the Redmi S2 is rumored to have a 6-inch 18:9 display with a 1440×720 resolution. It is expected to be powered by the Snapdragon 625 SoC, and is said to come with a 3,000mAh battery. It will apparently launch in three different RAM+storage configurations – 2GB+16GB, 3GB+32GB and 4GB+64GB. Reports also suggest that it will be offered in a whole host of colors, including White, Silver, Gray, Black, Gold, Rose Gold, Blue, Red and Pink.