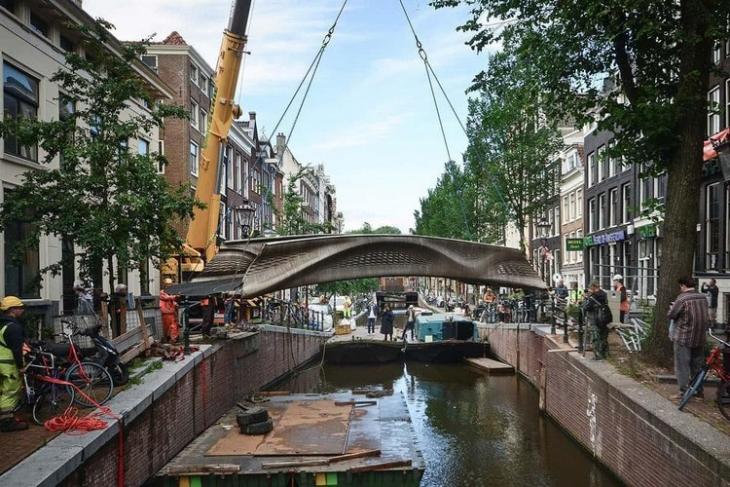 Dubbed the MX3D bridge, the structure was recently installed and opened for public use in Amsterdam, Netherlands. It was inaugurated by Queen Maxima of the Netherlands and is the world’s first 3D printed stainless steel bridge. The bridge is 12-meter in length and was built by four commercially available industrial robots.

It took six months for the robots to construct the bridge and over 4,500 kgs of stainless was used. The robotic arms used welding torches to build a layered structure of the stainless steel bridge. Upon completion, the entire bridge was transported from the workshop to its current location, which is over the Oudezijds Achterburgwal canal in central Amsterdam. The MX3D bridge is currently open for public use in the city. However, only pedestrians and cyclists are allowed to pass through the bridge.

Moreover, there is an array of sensors integrated into the structure of the MX3D. These sensors will monitor structural strain, vibrations, movements, temperature, and other such factors over a period of time. It will detect crucial changes in the structural orientation of the bridge in real-time as people use it and as it stands through the weather changes.

The engineers will then feed the gathered data to a digital model of the bridge. This will enable them to study the properties of the unique material and leverage machine learning to spot data changes. It will further enable the engineers to understand whether any maintenance or modification is required or not.

So, if the MX3D bridge could stand for a long time without any issues, we might see more such 3D-printed bridges around the world. Furthermore, as per Amsterdam municipality counselor Micha Mos, the bridge will also serve a tourist attraction in the city.

20-Year-Old Girl Becomes the First Person to Get 3D Printed Ear Made of Her Own Tissue!

This is the World’s Largest 3D-Printed Building