Our very own Twitter bird “Larry” got a makeover today, as announced on Twitter’s blog.  New Larry is more simple in design, created out of just three sets of overlapping circles.

But,  What does new Twitter logo signifies? The answer lies in the pic below, which compares old logo and the new one. 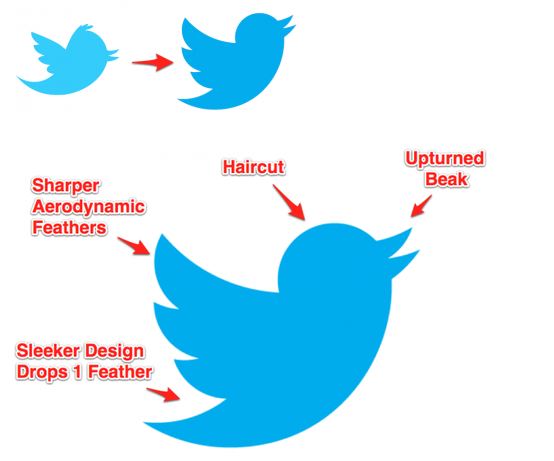 In last 2 years or so Twitter has grown tremendously with  140 million users and 340 million tweets per day, As per a recent report, 1 in 5 smartphone owners use Twitter actively, Which shows that people love using Twitter via smartphone too, which is rare case when it comes to other social networks.

Also, Larry hairs have not been touched since 6 years, so it was high time for haircut.

While starting up founders go through constrains of money, talent as well as time, same was the issue with Twitter when it just started but now it have world class Engineers, Programmers and Designers who put their time and energy to make Twitterverse better everyday.

Sharper Aerodynamics and Feathers shows the freedom to experimentation and innovations so as to make user’s experience awesome.

While flying high we should keep only important things with us and drop down unimportant ones.

Let us know in comments, what do you think about New Twitter Bird?