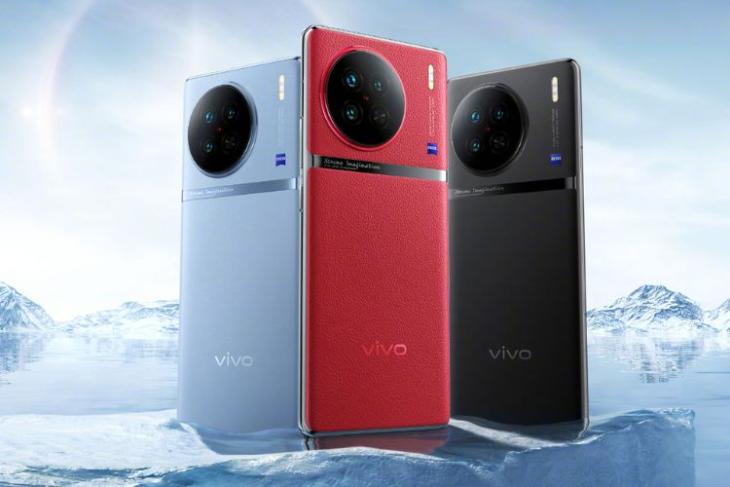 Vivo is gearing up to launch the successor to the Vivo X80 series, the Vivo X90 series, which is confirmed to happen on November 22 in China. The company has also revealed the look of the upcoming high-end phones. Here’s a look.

The Vivo X90 is also confirmed to come with ZEISS-backed cameras, much like the X80 lineup. We also have a look at the Vivo X90 design, which includes a huge circular rear camera hump (including four snappers) and a leather-finish back panel. The X90 series is also confirmed to come in Blue, Red, and Black color variants. The front panel is hidden but we expect a center-placed punch hole.

The Vivo X90 series will also include the V2 imaging chip, which was announced recently. The X90 Pro+ is expected to feature the 1″ Sony IMX989 main camera. However, there’s no word on the camera configuration for the other two models.

As for the internals, Vivo has already confirmed that the X90 will be powered by the latest MediaTek Dimensity 9200 chipset. This could be for the X90 Pro too. However, the Vivo X90 Pro+ is highly expected to come with the upcoming Snapdragon 8 Gen 2 chipset, which could be announced during the Snapdragon Summit 2022, scheduled for November 15.

Additionally, the Vivo X90 phones could come with support for 120W fast charging, a BOE display, and more. It is also said to run OriginOS 3 based on Android 13. More details should be out once the Vivo X90 series is made official. Hence, it’s best to wait for the event for a more conclusive idea. Stay tuned to this space for further updates.