While most smartphone makers are currently battling for the pole position in the budget segment of India, which is rife with opportunity, Vivo has decided to kick off its 2019 launch cycle with an exciting and feature-rich mid-range smartphone. Yes, I’m talking about the much-teased and anticipated Vivo V15 Pro.

The Vivo V15 Pro is appealing to the masses for a myriad of reasons, including the Ultra FullView display, in-display fingerprint sensor, 48MP rear and 32MP pop-up selfie camera. It’s also powered by the Snapdragon 675 chipset, a first for the Indian markets, so there’s definitely some curiosity around how good the device is. 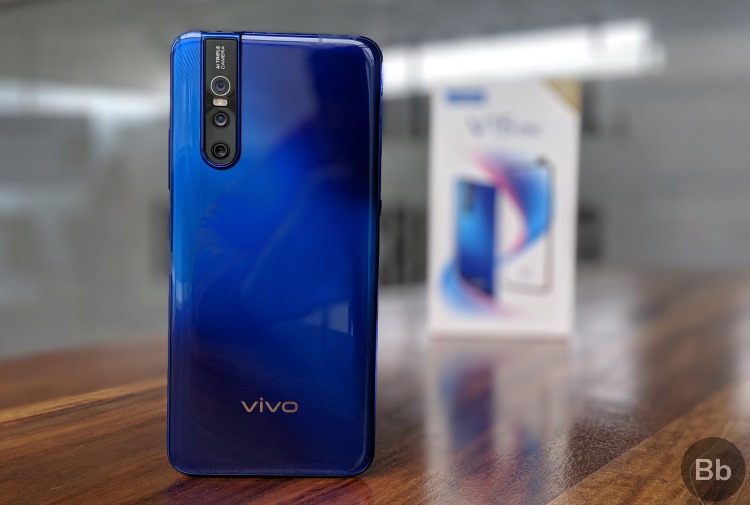 Well, Vivo was kind enough to send us the Topaz Blue variant of the Vivo V15 Pro, which looks gorgeous and I have been using it for the past couple of days. So, here’s how the device has fared in my initial days of testing:

Instead of jumping straight into my experience with the Vivo V15 Pro, let’s just take a quick look at its specs:

The Vivo V15 Pro comes packed in a simple cardboard box, with the same branding we have seen plastered all over social media before the announcement of this smartphone. Here’s everything you’ll find inside the box:

It’s good to see Vivo give users with all the essentials right out of the box, including the pre-applied screen protector to safeguard the device against any scratches. 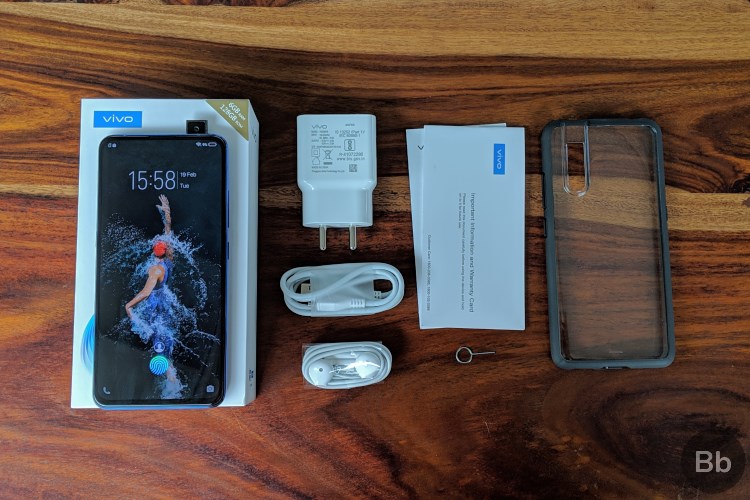 With the build materials and colors becoming of utmost importance to most smartphone makers, the Vivo V15 Pro has an exceptional design. The device looks absolutely stunning with the blue gradient on the rear and the pattern that appears under sunlight. The device feels good in the hand and its curved build makes it comfortable to use. 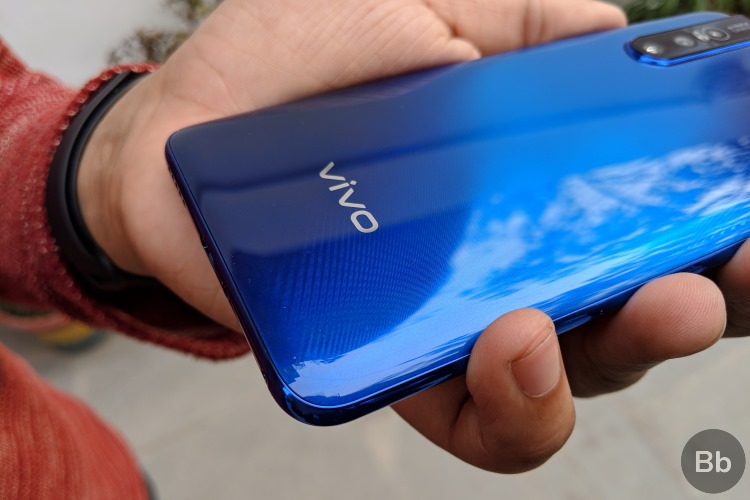 If you compare the Vivo V15 Pro to its predecessor, the Vivo V11 Pro, well, the former isn’t a whole lot different a design point of view. The Vivo V15 Pro still packs a polycarbonate rear panel, but it doesn’t really feel cheap to the touch and the blue hue looks pretty. However, a glass back would’ve been much appreciated.

As for the front, Vivo V15 Pro no longer includes any notch, like a waterdrop notch in the Vivo V11 Pro, but instead offers a more immersive experience with a FullView screen, which is exactly what we’re going to talk about next.

One of the standout features of the Vivo V15 Pro has to be the notch-free display, akin to the Vivo NEX that first brought the same in tow earlier last year. The device here sports a 6.39-inch FullHD+ Super AMOLED display, with a 19.5:9 aspect ratio and 2340×1080 pixels resolution. The screen has great viewing angles, accurate colors and deep blacks, which makes it an excellent overall package. 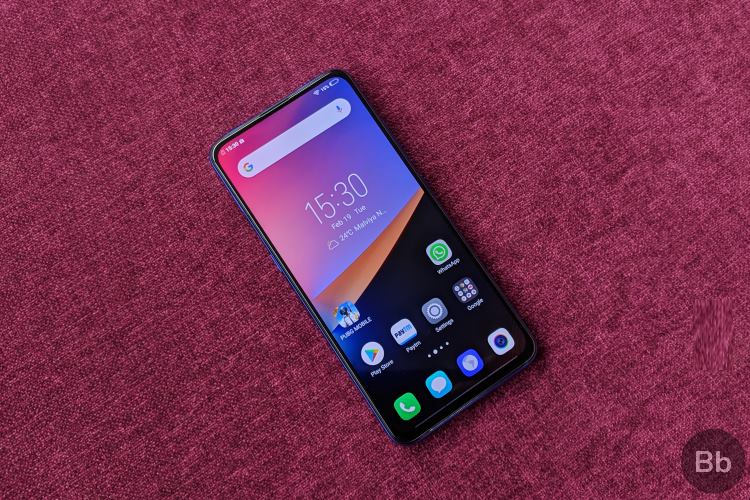 The in-display fingerprint sensor on board is snappy and reliable enough in daily use, as compared to earlier generations, but still not as fast as physical sensors for me. It is still good to see Vivo pushing forward with the optical fingerprint recognition technology.

One of the best things that Vivo has borrowed from its higher-end sibling, the NEX, is a mechanical pop-up camera. I know a lot of you may be wary of moving parts but I sure love the concept because of two reasons — a fullscreen display that’s immersive and an absolute joyride for entertainment buffs, as well as from a privacy point of view.

The selfie camera may not always be visible and pops up when required, but it has not deterred the company from adding Face Unlock to the Vivo V15 Pro. And it’s quite fast, as you can see in the video above, and works well in low-light conditions too.

The Vivo V15 Pro has an extra button along with the power and volume rocker. You can now call the Google Assistant with a dedicated button on the left. This is also where you will find the dedicated microSD card tray.

As for the ports on board, the Vivo V15 Pro includes a 3.5mm headphone jack up-top (so good to see this oldie is still here) and a microUSB charging port at the bottom, with the dual nanoSIM tray.

The Vivo V15 Pro is powered by the Snapdragon 675 chipset, which was announced last October but this is the very first phone with the chip in India. There is only one variant of the device and Vivo has included 6GB of RAM and 128GB of internal storage in the same.

This was my first bout with the Snapdragon 675 and I have to say that it appears to be significantly better than the Snapdragon 660 chipset on my Nokia 7 Plus. Vivo V15 Pro also easily handled all the tasks thrown at it and playing PUBG Mobile was a breeze. The user experience is fluid and I didn’t notice any lag in the couple of days I spent with it. 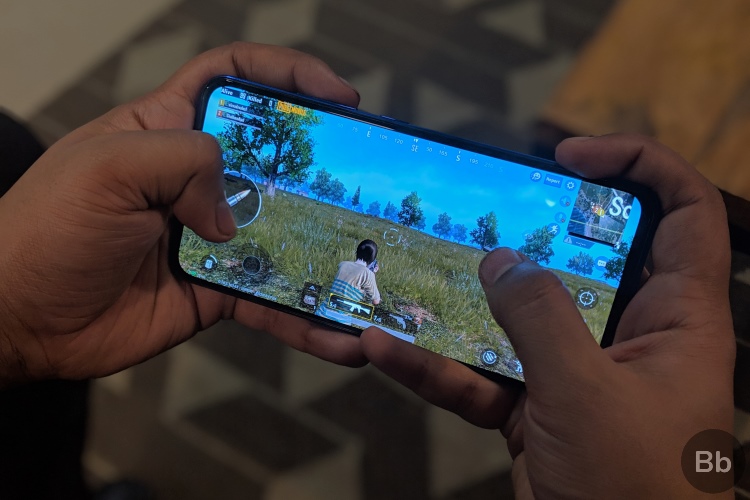 It isn’t surprising that the battle royale title adopted high graphics, by default, and I was able to face off against enemies with ease. There were no noticeable frame drops and jitters, which is a good thing. We will need to extensively test the Vivo V15 Pro to know better, so stay tuned for your complete review.

As for the software side of things, Vivo V15 Pro runs Android 9 Pie-based FunTouch OS 9 and it still resembles iOS in nearly every aspect. I haven’t been the biggest fan of Vivo’s custom Android skin but it’s pretty fluid, feature-rich, includes handy navigation gestures, and lot more. I would still prefer a vanilla experience or something less like iOS.

While the real-world performance of the Vivo V15 Pro says it all, there are users who are concerned with the benchmark figures. The single and multi-core Geekbench score of the Vivo V15 Pro stands at around 2400 and 6600 respectively, which is surprisingly better than the Snapdragon 710 chipset (for the Oppo R17 Pro). Yes, it came as a shock to me as well. 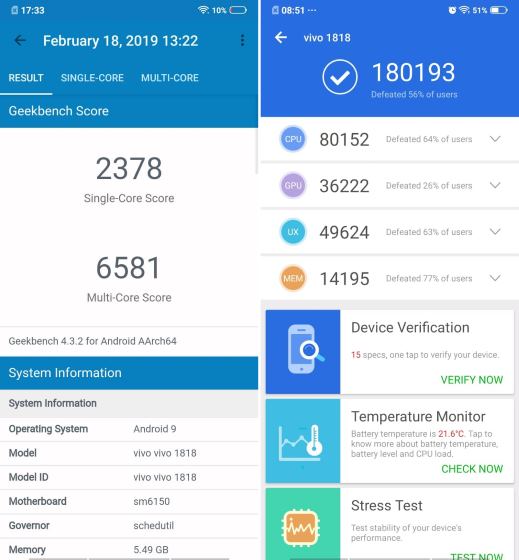 The AnTuTu Benchmark score for the device sits at around 180,000 and that also beats Snapdragon 710 score, which if numbers matters then it’s surely great.

The Vivo V15 Pro includes a triple-camera module, a step up from its predecessor and in line with its competitors. The primary one is a 48MP (f/1.8) Samsung GM1 ISOCELL sensor, coupled with an 8MP (f/2.2) ultra-wide angle lens and a 5MP (f/2.4) depth sensor for better portrait shots. The 48MP sensor natively captures 12MP shots, but you have the option to switch to the 48MP mode, which uses quad Bayer technology. 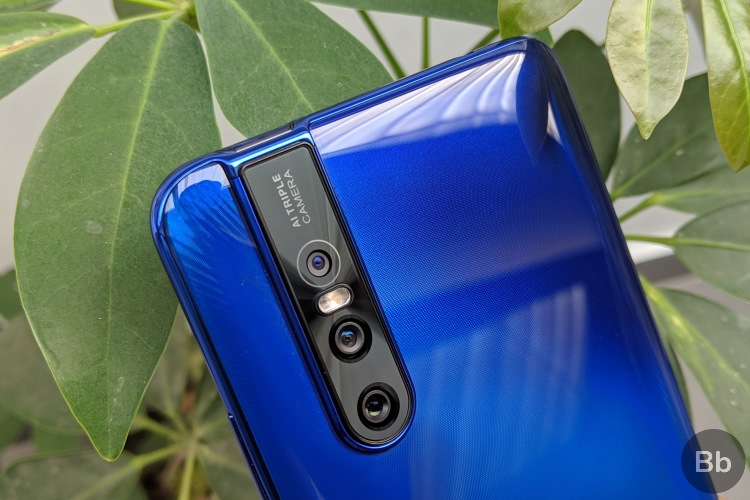 The shots captured using the Vivo V15 Pro in daylight are pretty sharp and detailed, with good color accuracy and dynamic range. I found myself pulling out the device often for it produces some great shots. However, I didn’t find much difference in the 12MP and 48MP shots, which was a shame. The night shots cheered me up though as the f/1.8 primary lens takes in a ton of light and makes photos look pretty good.

However, my favorite thing about the camera on the Vivo V15 Pro will have to be the ultra wide-angle lens which gives a new perspective to your pictures. You can see a few of the samples we captured, right here:

Another highlight of this smartphone is the 32MP pop-up selfie camera. Vivo boasts that it takes just 0.46 seconds for the camera to pop out, which was almost true, but it takes a few fractions of a second more for the camera app to be ready.

The selfies and portrait photos captured using the Vivo V15 Pro’s front camera look pretty good and crisp, with ample detail and sharpness but the AI Beauty mode on board can soften your face. The edge detection is absolutely great, with a natural looking blur in the background. Check out some of the samples right here:

The Vivo V15 Pro includes a 3,700mAh battery pack, which is a modest-sized offering, and should easily last you a whole day on low to medium usage. I have only used the V15 Pro for a couple of days, so it’s difficult to judge the battery life, which we’ll need more time to test thoroughly, so you can expect more on the same in our in-depth review. 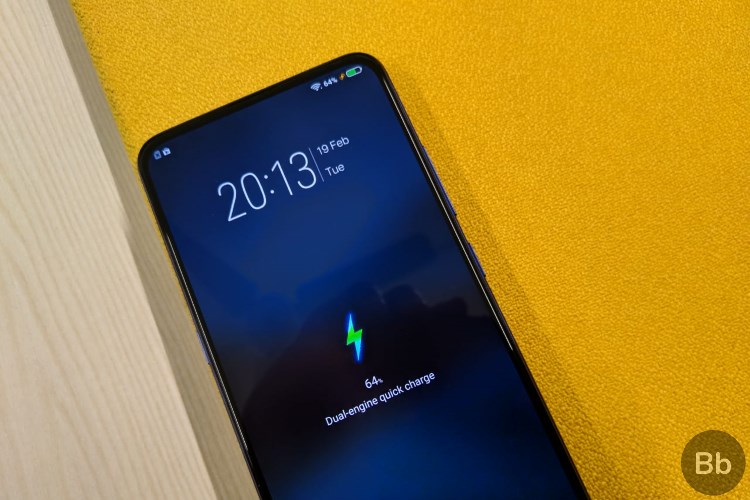 As for the charging, the Vivo V15 Pro is packed to the brim with innovative technologies, but it includes a microUSB port. And that’s a major disappointment in a smartphone that sits in the sub-Rs 30,000 price segment. The lack of a USB Type-C port was also a major shortcoming in the Vivo V11 Pro but the 18W dual-engine quick charge makes up for the same.

To put it plainly, the Vivo V15 Pro is a culmination of the Chinese giant’s treasure  trove of innovative features. The striking design, coupled with the Ultra FullView display, an in-display fingerprint scanner, and the pop-up selfie camera make this smartphone very attractive indeed. 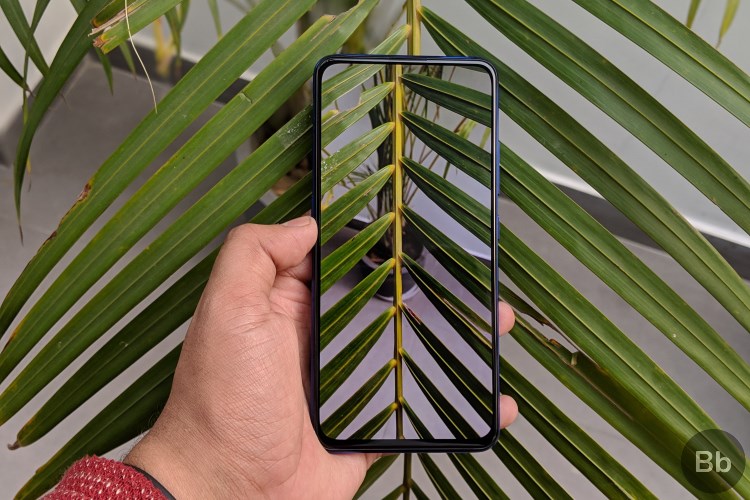 The Vivo V15 Pro certainly one-ups its predecessor, but with the sub-Rs 30,000 price tag, the smartphone lands it squarely among the likes of Nokia 8.1 (Rs. 26,999) and ZenFone 5Z (Rs. 24,999). This smartphone from Vivo is looking to be great but we will reserve our judgment for the complete review.