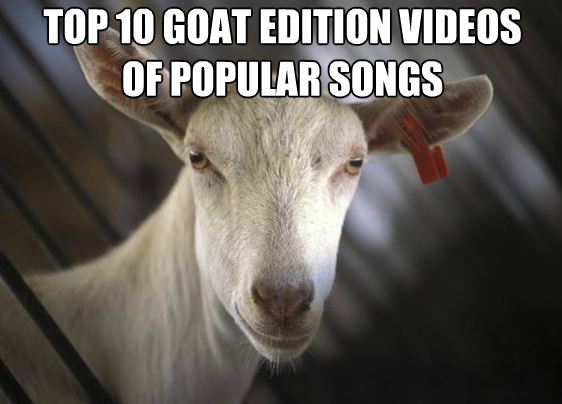 Internet is going crazy over memes and parodies!

Few days ago, Goats yelling like humans video went viral on the Internet and after some days, this viral video turned in to many Goat edition videos of Popular Songs, a viral meme. Here’s how,

One of the Taylor swift fan mashed up Goat’s yelling and the song, I Knew You Were Trouble and uploaded the video on YouTube. The mash-up got Taylor swift’s attention and she re-tweeted the link to her millions of followers and Bang, a new meme is born!

Without much ado, people started mashing up videos of various pop stars with the Goat video and it turned in to a new Harlem Shake. These mash-ups are more widely known as Goat Edition videos.

So, here i am bringing 10 best Goat Edition videos. You’re gonna enjoy all of them,

1.  Taylor Swift – I Knew You Were a Goat (ORIGINAL) || FFW (The beginning of Goat Edition Meme)

10. Baauer – Harlem Shake meets Goat Edition (This is the best one!)

The Making of Gangnam Style [Video]