Skip to content
Home News Think Robot Dogs are Cool? This Company Has Made a Unicorn Robot to Give Rides to Kids 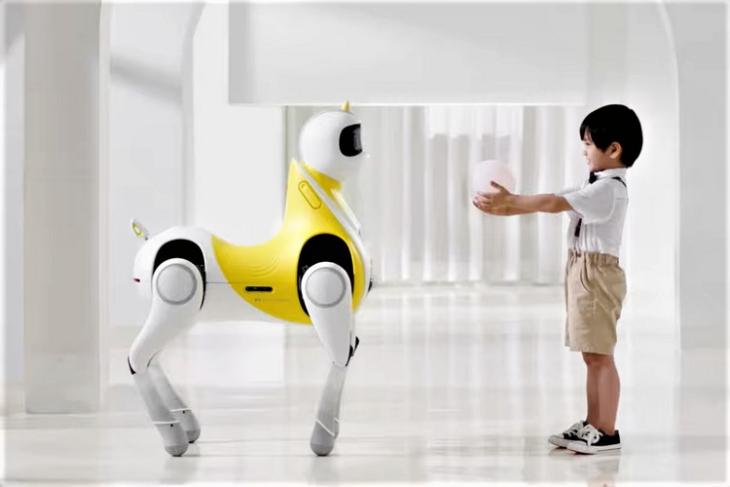 When we think of four-legged robots, Boston Dynamics’ creepy-yet-resourceful robot-dog Spot instantly comes to mind. The advanced robot dog has been helpful in various sectors of society and industry, ranging from monitoring the nuclear-affected Chernobyl to helping front-line workers cope with the Coronavirus pandemic and even helping the NYPD solve cases. However, one task Spot cannot do is carry around humans on its back. So, a Chinese electric car maker has now developed a four-legged unicorn robot that can also be used as a mode of transportation.

Dubbed the Xpeng Robotic Unicorn, the robot has been developed by a China-based EV company called Xpeng. The company designed the robotic unicorn to be a nifty mode of transportation, preferably for kids, and also an intelligent companion for users.

So, the robot comes with four limbs attached to a body that has a seat-like area on its back. It also has a monochromatic display on its face, with the help of which the robot mimics various eyes-based expressions to convey emotions.

Now, as there is a seating area built right on its back, users can comfortably sit on top of the Xpeng Robotic Unicorn for a horse-riding-like experience. However, it is worth mentioning that it won’t be able to carry an adult human being on its back. Instead, the unicorn robot looks ideal for kids aged 7-15 years.

Apart from carrying around humans, the Xpeng Robotic Unicorn can also track objects and autonomously run through dicey terrains, thanks to the AI technologies borrowed from the company’s autonomous EV initiatives. Moreover, the company says that it can also establish an emotional connection with its riders by leveraging the AI features and its ability to convey emotions through the onboard display.

The company recently unveiled the robot with a CG-heavy video on YouTube. Although the video showcases the various features of Xpeng robot, the current real-world prototype is shown off at the end of the short promo video. You can check it out attached below.

As for the availability of the Xpeng Unicorn Robot, the company has not mentioned anything about mass producing the robot just yet. However, now that the company has already made a prototype, chances are it will get into production if the company sees a potential market for it in the coming days.