Skip to content
Home News This Is the World’s Smallest Remote-Controlled Robot That Looks like a Tiny Crab! 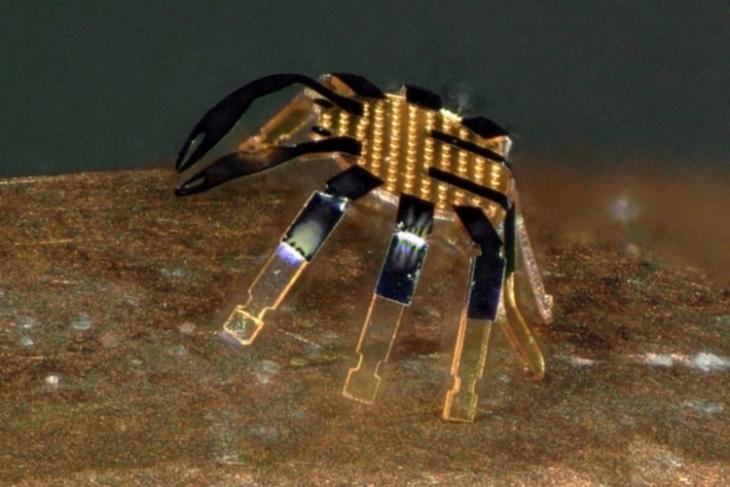 As technology continues to advance, we have seen immense developments in the robotics sector in the recent past. Researchers have previously built tiny Xenobots that can biologically reproduce and even cockroach-inspired robots that cannot be squashed! Now, a team of researchers has built the world’s smallest remote-controlled walking robot in the shape of a tiny crab that is smaller than a flea. Check out the details right below.

A team of researchers and engineers from Northwestern University has built the tiniest remote-controlled robot that resembles a crab. The engineers recently published their work in the Science Robotics journal to detail their project. Now, to build the tiny crab-robot, the engineers used a shape-memory alloy material that comes with a unique ability. The material, when heated, can get back to its original shape, and the researcher used this very ability to not only make the tiny robot move but also control its direction.

The team leveraged a scanning laser beam to heat different spots across the robot’s body remotely. When the robot cooled, a thin layer of glass structure returned the deformed component to its original shape. This entire cycle was then utilized by the engineers for the crab-shaped robot to walk. Furthermore, by controlling the directions of the scanning laser beams, they were also able to control the movement of the robot in different directions.

“Our technology enables a variety of controlled motion modalities and can walk with an average speed of half its body length per second. This is very challenging to achieve at such small scales for terrestrial robots,” said Yonggang Huang, one of the authors of the research paper.

The tiny crab-robot, which is around half a millimeter wide, is not constrained to just walking. It can bend, twist, crawl, turn, and even jump, which is pretty impressive. You can check out a video to see how it functions.

Plus, the engineers behind the project can build similar, tiny robots in any shape or form using the current manufacturing method. They also believe that their advancements are taking them one step closer to building tiny robots, capable of doing practical jobs in constrained places. Other than a crab-shaped robot, the team has also built similar, millimeter-sized robots in the shape of other small insects like crickets, beetles, and inchworms.

The lead engineer, John A. Rogers, says that “the development of microscale robots is a fun topic for academic exploration.” He further added that these millimeter-sized robots could be imagined “as agents to repair or assemble small structures or machines in industry or as surgical assistants to clear clogged arteries, to stop internal bleeding or to eliminate cancerous tumors.”

One thing to note is that these robots are still under development and it remains to be how they are used in the future. So, what do you think about these tiny robots? Let us know your thoughts in the comments below, and stay tuned for more such interesting stories.