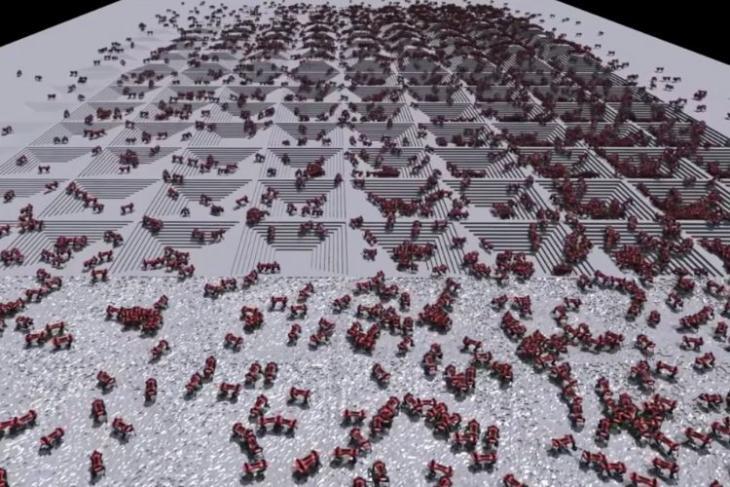 While humanoid robots are becoming common in today’s world, quadruped robot dogs are taking over the operational sector for various businesses around the globe. Witnessing this demand, we have seen several companies like Boston Dynamics and Xiaomi come up with advanced robotic dogs that can perform heavy-duty tasks with ease. Now, ETH Zurich researchers have collaborated with popular GPU maker Nvidia to develop an advanced algorithm – to help train real-world robot dogs to walk and run on stable and unstable terrains.

Researchers from ETH Zurich in Switzerland have partnered with Nvidia to create an obstacle course for a virtual army of robot dogs. The virtual simulation is used to train real-world robotic quadrupeds to walk on complex terrains like slopes, stairs, and steep drops.

The four-legged machines, in the simulation, are referred to as “ANYmals” and look like thousands of ants wriggling aimlessly in a virtual field. The researchers used 4,000 virtual robots to create the simulation that you can check out right below.

Now, although Nvidia’s special chips are pretty good at calculating graphics rendering and running neural networks, they are not very good at simulating physics-based properties such as climbing and sliding. However, the researchers came up with some clever software-based workarounds “to get it right”, as per Nvidia’s VP of Simulation Technology Rev Lebaredian.

Following the creation of the complex simulation using massively parallel deep reinforcement learning, the researchers used it to train the legs of real-world robots. This enabled the robots to learn to walk on slopes, stairs, and other complex terrains in minutes. Moreover, each time a robot dog learned to tackle challenging terrain, the researchers gave a more difficult terrain challenge to make the control algorithm more advanced.

So, the ETH researchers and Nvidia think that the “ANYmals” simulation can be a great tool for training real-world robot dogs in lesser time using reinforcement learning. You can check out the official research paper on it via the corresponding link to know more about the complex algorithm and the virtual obstacle course.