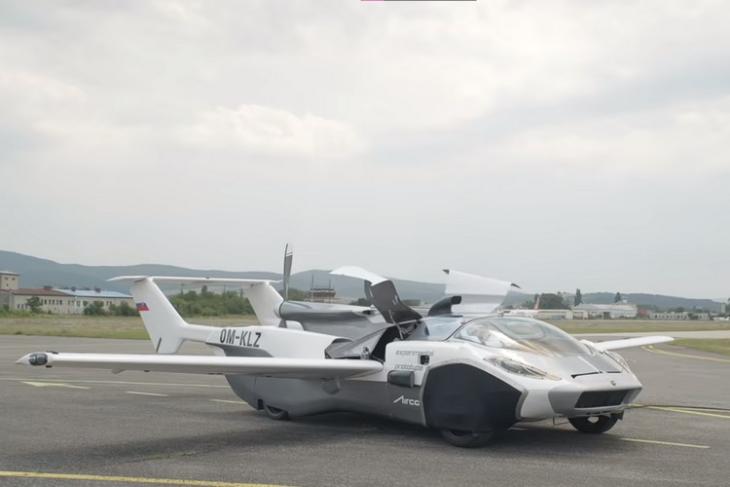 As we are gradually moving towards a future that we see in sci-fi movies, we are seeing more and more companies invest in flying cars. We have seen major companies like Volvo, Uber, and Rolls Royce working on flying cars since way back. However, one company named Klein Vision has been working to develop a flying car for almost 30 years. Now, they finally made a transforming flying car that recently took its inaugural flight.

Now, Klein Vision, the company from Slovakia, developed the “AirCar” with the idea of a vehicle that can run on land and fly up in air. Hence, it is a convertible which, instead of pulling out a sunroof, brings out a pair of retractable wings and a propeller! It also extends its back to get that sweet tail for air-navigation.

Watch It Fly for the First Time

The company unveiled the final iteration of the AirCar back in 2019, according to a report by Auto Evolution. However, the flying convertible completed its first flight just recently. You can check out the official video from Klein Vision right below.

Now, as you can see, the AirCar looks super-cool, and the transformation from a land-treading vehicle to an air-tearing automobile looks straight outta 2077. The company says that the car takes only three minutes to turn from a car to an air-car.

However, unlike most flying vehicles, Klein Vision’s model does not rely on “Vertical Take-Off and Landing” (VTOL) and needs quite a long stretch of road to take its flight.

“With AirCar you will arrive at your destination without the hassle of getting a ride to the airport and passing through commercial security, you can drive your AirCar to the golf course, the office, the mall, or your hotel and park it in a normal parking space,” said Anton Zajac, the co-founder of Klein Vision and one of its investor.

According to reports, the AirCar has a range of 621 miles (~1000 km) and can reach speeds up to 124 mph (~200 km/h). However, in which of the two modes are these figures registered is not confirmed by the company.

Now, although the car looks almost ready, it will be much longer before it becomes available for the public. Even though they are working on a 2 and a 4-seater model, the company says that they are facing some major challenges in the production process. Moreover, certifying the car for air travel is another long process which the company has to face in the coming days.

This Japanese Company Aims to Showcase Flying Cars by 2025