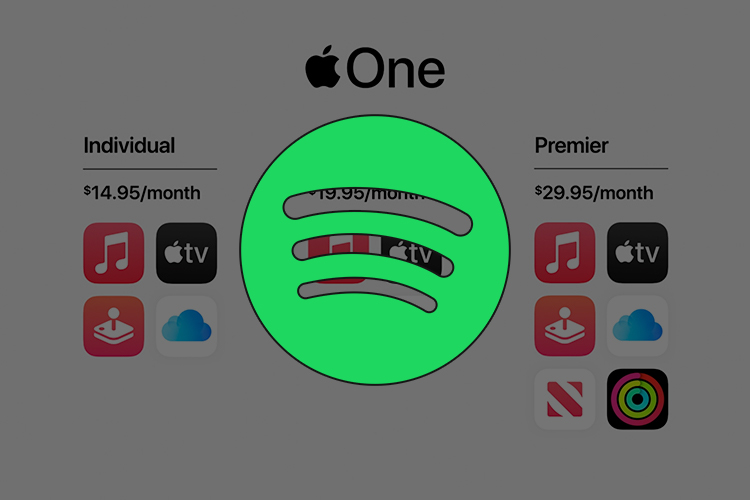 Spotify is accusing Apple of monopolistic trade practices following the latter’s announcement of its ‘Apple One’ subscription bundle alongside the Apple Watch Series 6 and 8th-gen iPad models at its ‘Time Flies’ event on Tuesday. In a strongly-worded statement, the Swedish music streaming firm urged regulators around the world to stop the Cupertino giant from abusing its monopolistic power, saying that it threatens the collective freedom of consumers “to listen, learn, create, and connect”.

In a statement to Cheddar’s J.D. Durkin, Spotify said: “Once again, Apple is using its dominant position and unfair practices to disadvantage competitors and deprive consumers by favoring its own services. We call on competition authorities to act urgently to restrict Apple’s anti-competitive behavior, which if left unchecked, will cause irreparable harm to the developer community and threaten our collective freedoms to listen, learn, create, and connect”.

NEW — @Spotify is again calling out @Apple in a new statement provided by a company spokesperson to me/@cheddar:

"Apple is using its dominant position and unfair practices to disadvantage competitors and deprive consumers by favoring its own services." pic.twitter.com/zbQMTRkTAT

Apple, on its part, claims that none of its offerings, including the new Apple One bundle, are in violation of US antitrust regulations. In a press statement following Spotify’s complaint, the iPhone-maker said that even with the new offering, customers will still have the freedom to choose alternatives if they so want.

According to Apple: “Customers can discover and enjoy alternatives to every one of Apple’s services. We’re introducing Apple One because it is a great value for customers and a simple way to access the full range of Apple’s subscription services. We’ll be recommending the Apple One plan that saves you the most money based on the subscriptions you already have. It’s perfect for anyone who loves any of our services and wants to get more for less, and it’s especially great for families. Also select services included in Apple One are available to enjoy on non-Apple devices, and you can cancel anytime”.