Skip to content
Home News 8th-Gen iPad Announced with A12 Bionic; Priced at $329 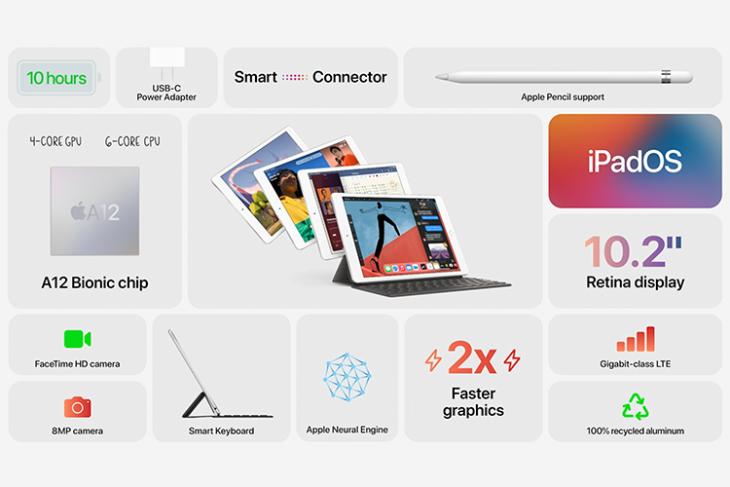 Alongside the Apple Watch Series 6, and new Apple One bundles, the Cupertino giant has today announced the new 8th-gen iPad. The new iPad comes with the same design as the 7th-gen iPad, but with a bunch of under the hood improvements.

Those improvements are thanks to the new A12 Bionic chipset inside the iPad. For the unaware, the A12 Bionic is the chipset you’d find inside the iPhone XS series, and the iPhone XR. The processor comes with a 6 core CPU and a 4 core GPU. As a result, the new iPad offers a 40% faster CPU performance as compared to last year’s iPad. Plus, the 8th-gen iPad also offers 2x faster GPU performance as compared to the 7th-gen iPad.

Same as last year, the 8th-gen iPad also works with the Apple Pencil. However, unfortunately, it’s still the first-gen Apple Pencil so you don’t get any of the improvements of the second-gen Apple Pencil. The same goes for keyboard support. While you get support for Apple’s keyboards, there’s no support for the new Magic Keyboard that was announced with the new iPad Pros.

Still, with the improved performance, Apple has kept the price of the new iPad the same as last year’s iPad. Yeah, the new 8th-gen iPad is priced at $329, which is a great price for the iPad. After all you do get smart connectors with the iPad, which means you can pretty much use it for everything you need to. Plus, education customers can get it for $299.

You can pre-order the new 8th-gen iPad today, and the device will go on sale from this Friday.