Heard an amazing song on the radio or at a club but can’t seem to remember the name or the lyrics, so that you can find the song? Well, chances are, you’ve used Shazam to identify the song. While there are a number of ways through which you can identify songs, Shazam has to be the most popular solution. Although Shazam is definitely a great music identifying app, it has its fair share of problems. Firstly, the app is packed with so many features that it can literally make even the most powerful smartphones lag at times. Quite honestly, you might not even find all those features useful to begin with. So if you are looking for a simple and easy-to-use app for identifying the songs that are around you, then here are our top 6 Shazam alternative apps that can give it a run for its money:

The first app on any list that says “top alternatives to Shazam” has to be SoundHound. It is the biggest rival to Shazam and any argument on which app is better is never unanimously settled. SoundHound allows you to go hands-free and simply say: “OK Hound… what’s this song?” and the app will recognise the song for you. You can also tap on the orange button to identify songs, and see live lyrics, play the video, share, stream, or buy the track. You can ask questions like “What is Taylor Swift’s latest song?” and even hum the song if it’s stuck in your head, all hands-free and the app will identify the song. 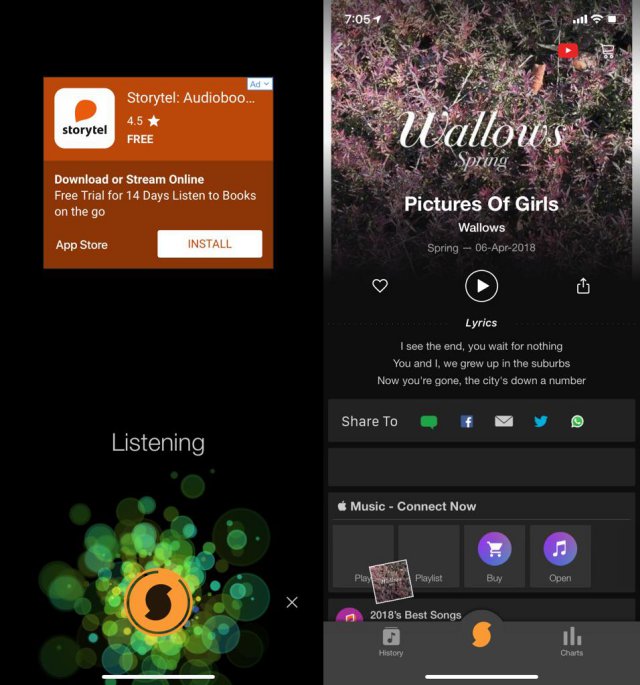 With SoundHound, you can add songs to Spotify and also easily search, discover and play music. Charts, weekly feature songs, videos, and artists, music man, artist biographies, etc. are many of the other features of SoundHound.

Genius is also one of the most popular and high-rated apps for identifying a song. Not only can it identify the song for you, but it’ll also show the lyrics and the official music video (if it’s available). Once you identify the song, you can either choose to share it via other apps or play it directly on your phone using Apple Music, Spotify, etc. 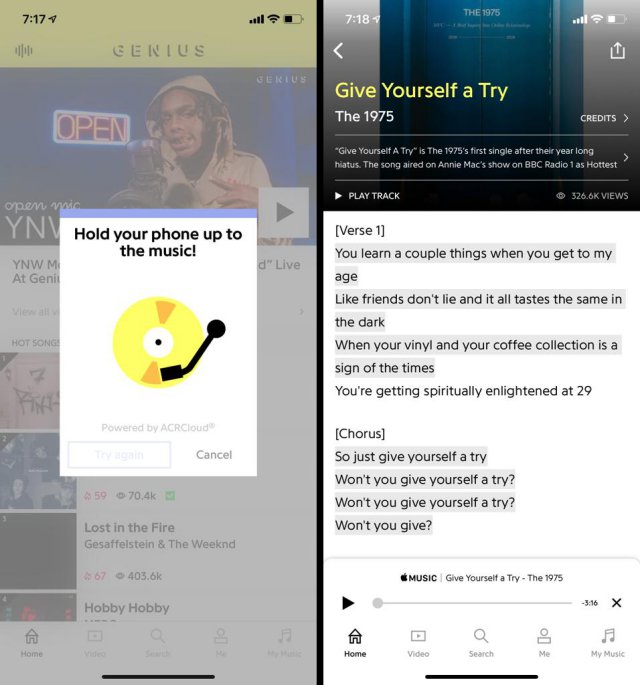 Genius also let’s you maintain your account on the platform, with which you can interact with others. You can share your discovery or get to know about other new tracks and albums. In addition to that, you can also use Genius to check out the top tracks and play them directly through the app of your choice.

3. Musicxmatch – Lyrics for your music

Musicxmatch by definition is a music player but it is also capable of identifying music among other things. Its main feature is it to provide lyrics and it boasts of one of the largest lyrics databases in the market. To identify music, you actually have to tap on “Identify lyrics” and the app will simply identify the song for you. It is incredibly fast in identifying the music and also provides you with live lyrics of the song that is playing, so that you can sing along. Apart from all this, you can also create LyricCards and explore artist biographies including the latest and top tracks. 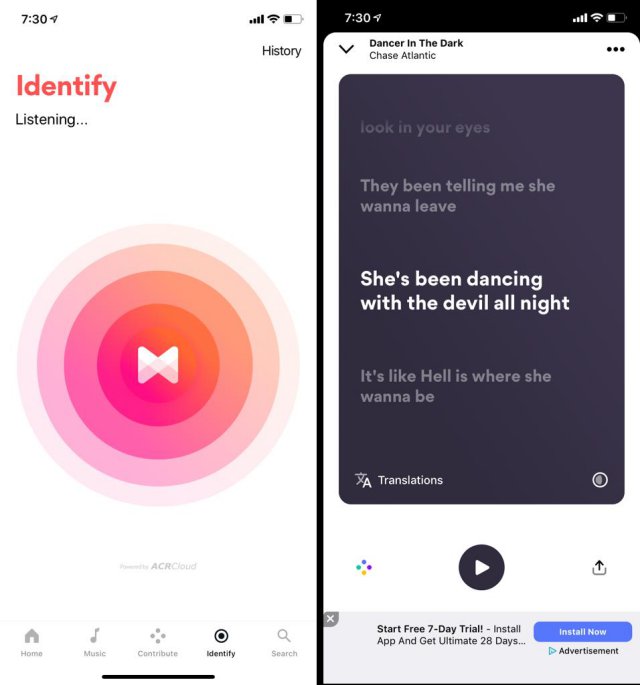 MusicID, one of the best music identification apps that on its best day can put even Shazam to shame. The identification of songs is fast and all you have to do is tap on the microphone button in the app to get it started. Once identified, the app will provide you with complete details of the song and also YouTube videos and similar songs. You can purchase the song from the app itself through iTunes, or Amazon and share song information with friends.. It has a clutter-free interface and just about the perfect combination of options available for the user, neither too much nor too less. 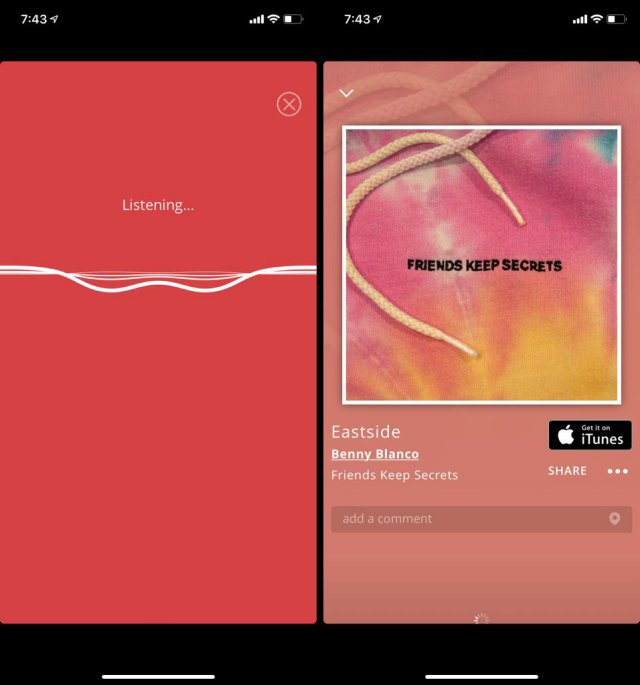 Soly is only available on Android, but it’s one of the best Shazam alternative that’s out there right now. The app, as you can see, has a simple and colorful interface. As soon as you open the app, you’ll see the option to “Identify” the song right in the center. Tap that, and Soly will connect to ACRCloud’s database to pull out the result for you. 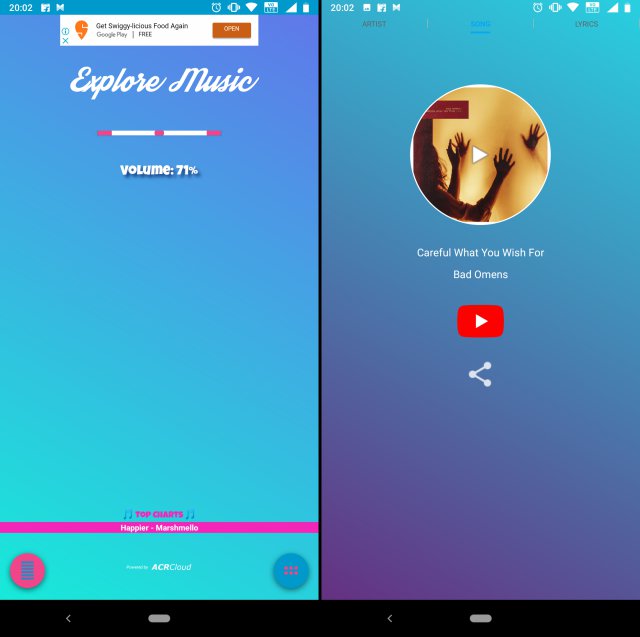 After identifying the song, Soly will give you an option to listen to it on YouTube or share it with your friends and family via other third-party apps. You also get some other options like Lyrics finder, lyrics generator, and more, but they’re not as effective as Soly’s song identification feature. Lastly, we’d like to point out that you’ll have to put up with a lot of ads while using Soly. So if you’re someone who hates looking at ads, this might not be the app for you.

Yes, these aren’t necessarily apps, but both the digital assistants are pretty good at this job. In fact, they’re so reliable that you don’t even have to install a separate app to identify the music that’s playing around. 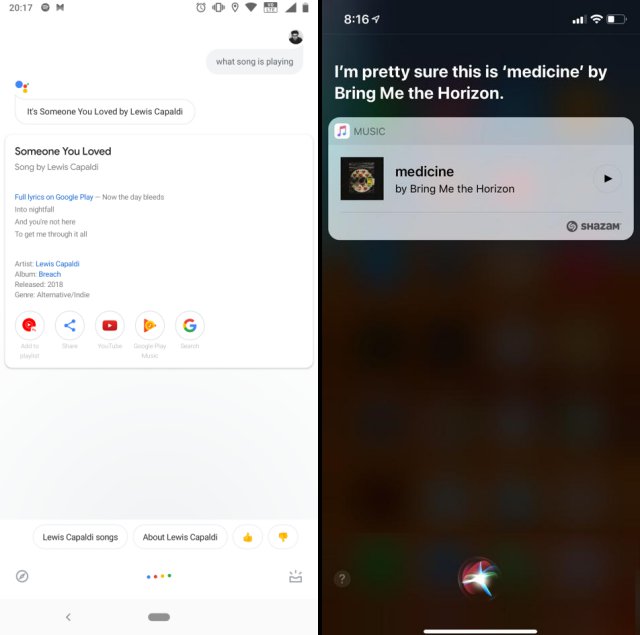 Some great apps like Shazam for easy music identification

Unlike the yesteryears, music identification apps like Shazam are just about as vital as decent music players. The ability to identify any song that you have heard has become very easy and this has allowed people to discover some great music. Shazam is and will continue to be one of the best apps under this category but all of our above-mentioned apps can provide good competition and in some cases, even surpass it. The features in addition to music identification are not to be ignored, as it is fun to know the name of the song but, it is even better having the lyrics, video, biography and much more, simply one tap away. 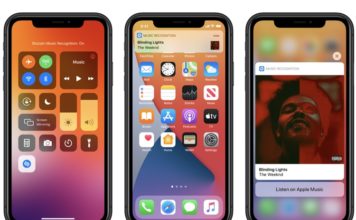 With the latest iOS 14.2 beta, Apple has deeply integrated music recognition service Shazam into iOS with a dedicated toggle in Control Center. The...
Subin B - Sep 18, 2020

Clash of Clans is one of the most popular strategy games available on almost all the mobile platforms out there. Everyone is playing it...
Arjun Sha - Sep 8, 2020 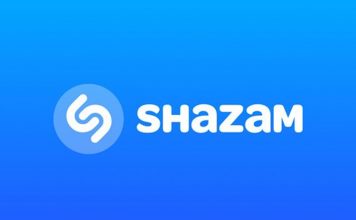 Google Play Store is the best place to download Android apps and games for most users. However, for some users, the Play Store might...
Arjun Sha - Apr 6, 2020