The latest operating system for iPhone — iOS 14 — brings several new features. One of the most talked features is the ability to change default email clients and browser apps on the iPhone. Users have been waiting for this feature for so long, and it’s finally here. So, in this article, I am going to show you how you can set Gmail as your default email app on iPhone in 2020.

Set Gmail as Your Default Email on iPhone in iOS 14

While the default mail app on iPhone and iPad is good enough for casual users, it’s not optimal for users who have to deal with a lot of emails daily. There’s no smart organization of emails, and even the Smart Folder feature that is available on the macOS Mail app is not available on iPhone. That’s why I prefer to use the Gmail app on the iPhone.

And now, I can finally set it as my default email app. After you set the Gmail app as the default app on iPhone, iPhone will launch Gmail when you click on an email ID. So, now you don’t have to copy an email address and then paste it into Gmail. You tap on it, and Gmail will open automatically.

To use this feature, first, make sure that your iPhone is updated to iOS 14. Go to Settings -> General -> Software Update, and install the iOS 14 update if you have not already done so. Now, update the Gmail app by launching App Store -> Gmail -> and update the app.

Now, let’s get to our tutorial:

1. First, launch the Settings app on your iPhone. Scroll down to find Gmail, and tap on it.

2. Here, find the “Default Mail App” option and tap on it.

3. Finally, tap on Gmail to select it as the default mail app. 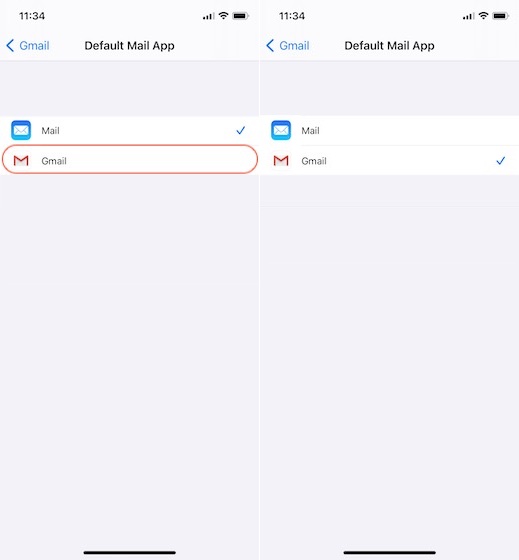 Use Gmail as Default Mail Client on iPhone and iPad

As you can see, Apple has made it super-easy to change your default apps. That being said, currently, there’s a bug that reverts the default email app to Apple Mail when you restart the device. So, keep that in mind.

Also, don’t forget to read our extensive coverage on iOS 14 features such as the back tap feature, the new guides feature in Apple Maps, headphone audio customization feature, and more.