Netflix is quite possibly the biggest on-demand video streaming platform in the world with over 137 million paying subscribers all over the world (by Statista numbers at the end of Q3 2018). I’m sure most of you use Netflix on a regular basis (I, personally, end up using it every single day but whatever), and a lot of you may have realized that Netflix’s search functionality isn’t all that great, especially when you consider the exceedingly huge catalogue of films, TV shows, and documentaries that Netflix has. Fortunately, there are a bunch of secret Netflix codes that you can use to view all the films and TV shows that Netflix has in a particular genre. That sounds pretty awesome right? Well, here are all the Netflix codes and how to use them:

What are Netflix Codes?

First and foremost, let’s answer the question that a lot of you probably have right now — what in the heck are Netflix codes? To keep it simple, Netflix has a bunch of genres that you can search for; you know, things like ‘Action,’ ‘Comedies,’ yada yada. However, Netflix also has a bunch of genres that you don’t get to directly see (for the most part), but they are there, and you can use those to find the exact type of movies and TV shows that you’re looking for.

Fortunately, people have figured out the genre ids for these genres and you can use these to get exactly what you’re looking for on Netflix.

How to Use Secret Netflix Codes on PC, Chromebooks, and Browsers

If you’re using Netflix on your PC, laptop, MacBook, or a Chromebook using a browser, using Netflix codes is pretty straightforward. All you need to know is the URL given below, and the secret Netflix code for the genre you want to check out on Netflix:

There are a bunch of secret Netflix codes, one for each genre on the website, I’ll be posting a table at the end of this article with all of the secret Netflix codes that you can use to search for categories of your interest. However, for explaining this better, we’ll take an example.

Let’s say I want to watch some critically acclaimed quirky comedies on Netflix, well, the Netflix code for that particular genre is ‘1577’ so I can just go the URL bar of my browser (in my case, Firefox), and type in the URL I mentioned above, while replacing the [Netflix Code] part of that URL with the genre code. So it’ll look like the following URL:

Now when I hit enter, this is what Netflix will turn up:

Similarly, you can replace ‘[Netflix Code]’ in the URL above with the secret Netflix code for any genre and get results for that particular genre in Netflix.

How to Use Secret Netflix Codes on Smart TV, Android, and iOS

While all that is well and good, not all of us watch Netflix exclusively on a laptop, right? So, if you use the Netflix app on your Smart TV, iPhone, iPad, Android device, PS4, or Xbox One, you obviously can’t use the URL I mentioned above. So how can you use Netflix codes on the Netflix app?

Well, unfortunately, the answer is that you can’t use the secret Netflix codes in the Netflix app, be it on your Smart TV, your iOS or Android device, or a gaming console like the PS4 or Xbox One.

However, all hope is not lost, because there is a way that you can still get to these hidden genres in the Netflix apps, and you can actually do that without ever using the secret codes at all. Check it out:

So, let’s take an example yeah? Say I want to check out the genre ‘Comic Book and Superhero Movies.’ The genre id for this is actually 10118 but I can’t use that on the Netflix app (believe me, I tried). Well, you can just follow the steps below: 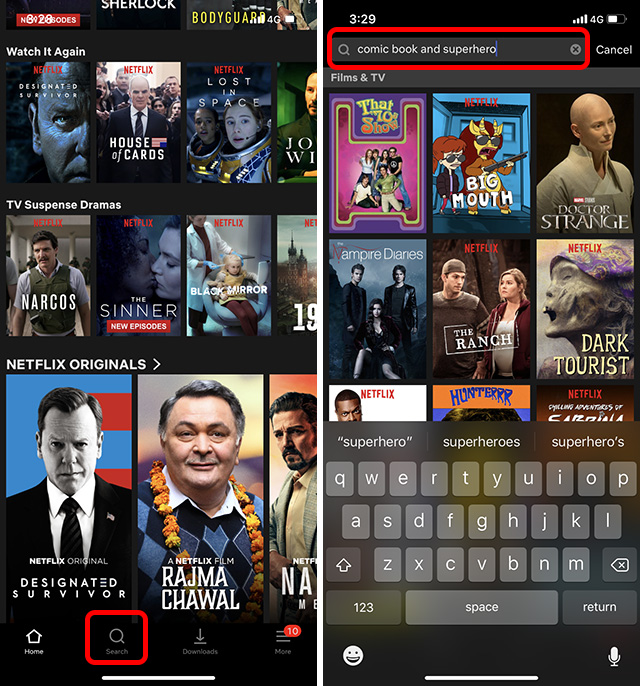 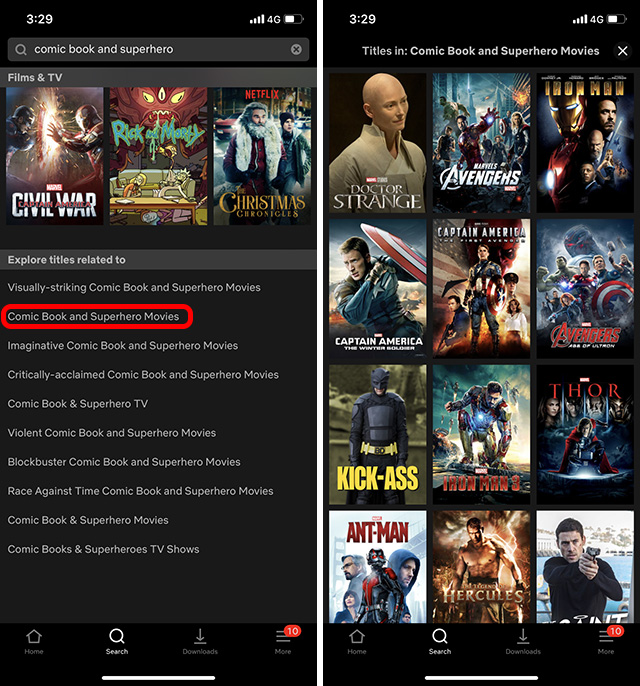 It’s a pretty long-winded way of getting these secret Netflix codes to work on the Netflix app, but that’s all I could figure out so far. Plus, regardless of how ‘dirty’ this method is, it does work, so there’s that. I tried this out on my current daily driver, the iPhone XR, and also on Rupesh’s OnePlus 6 and it works just fine, so it should work on PS4, Xbox One, and even on Smart TVs.

Yeah, there are a lot of these aren’t they?

Use Netflix Like a Pro with These Secret Netflix Codes

Well that was all about secret Netflix codes and how you can use them in the browser, or in the Netflix app on your Android device, iPhone, or any other platforms you might be using Netflix on. Also, while Netflix doesn’t add new codes very frequently, I will be updating the list of secret Netflix codes anytime a new genre makes its appearance on Netflix.

Apart from that, you should check out our articles on the best Bollywood movies on Netflix, and also on the Netflix download limit.