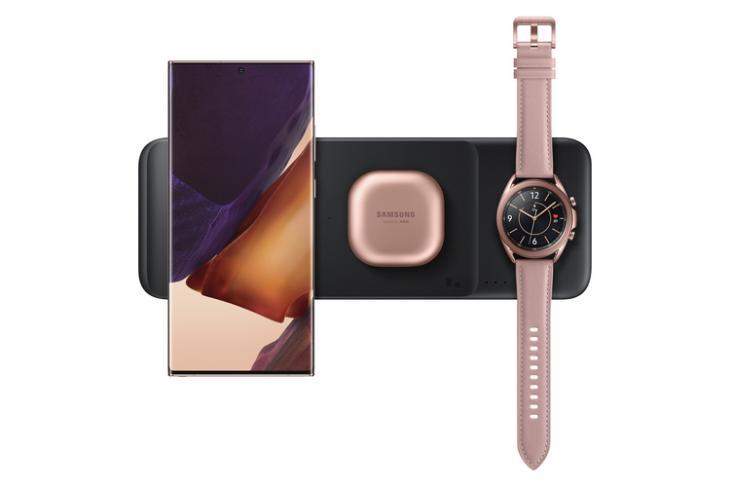 At its ‘Life Unstoppable’ virtual event today, Samsung unveiled a new multi-device wireless charger called ‘Trio‘ alongside a slew of other gadgets, including the Galaxy A42 5G smartphone, the Galaxy Fit2 smart band, a 4K projector called ‘The Premiere’ and the Galaxy A7 (2020) tablet. A successor to the company’s ‘Duo’ wireless charger, the Trio supports the Qi wireless charging standard and, as its name suggests, enables users to charge up to three compliant devices simultaneously.

Samsung hasn’t officially released all the details about the Trio, but the official render suggests that the device can charge their smartphone, wireless earbuds and smartwatch at once. The image seems to be consistent with an earlier leak from tipster, Evan Blass (@evleaks), who had released a separate render showing a designated area for smartwatches at one end of the device.

With Samsung yet to announce the specifics about the Trio, we don’t know whether it comes with coils in profusion on the inside. In fact, we do not even know about the charging speeds that the device will support. Samsung hasn’t released pricing details for the Trio either, but according to SamMobile, it might carry a €99 (~Rs. 8,600) price-tag when it finally launches.

As mentioned already, Samsung is yet to detail all the technical, pricing and availability details about the Trio. However, in its press release, the company described the device as “a brand-new wireless charging solution designed to charge compatible devices all at once, offering everyday convenience and ease”.  Let’s hope it is available for purchase sooner rather than later.