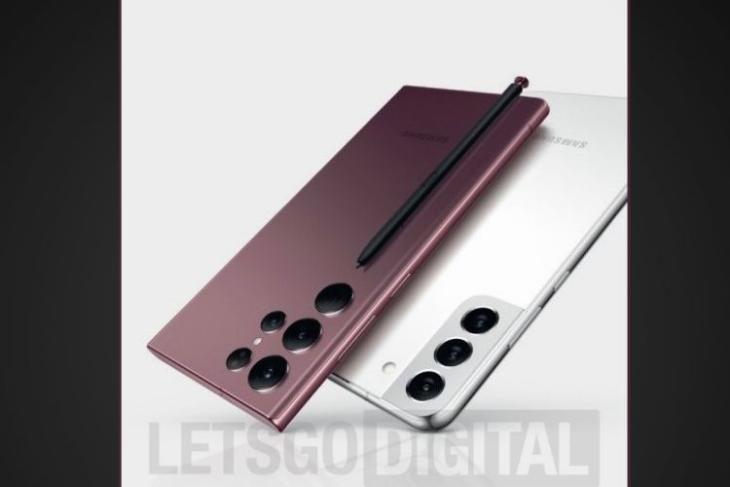 In a recent report by Dutch publication LetsGoDigital, multiple images that showcase the Samsung Galaxy S22 Ultra and the Galaxy S22 Plus were revealed. Although the publication did not reveal the source of the images, it did confirm that they are official posters that will be used by Samsung to promote the Galaxy S22 series when it launches next year.

Furthermore, the image shows the S22 Ultra with the Samsung S Pen with an accented button. Hence, it also confirms previous rumors, suggesting that the Galaxy S22 Ultra would come with an S Pen slot. Plus, we can see the S22 Ultra sporting the water drop camera design at the back, which we saw in hands-on images earlier this year.

Coming to the new details about the cameras of the S22 Plus, the primary difference between the upcoming model and the previous model is that the camera module is now less protruding. The standard Galaxy S22 and S22 Plus will reportedly come with similar specs, except in the display department. The non-Plus model is rumored to feature a 6.06-inch display, while the Plus variant will have a 6.55-inch screen.

Samsung is expected to officially unveil the Galaxy S22 series at its next Galaxy Unpacked event, which is rumored for February 8, 2022. If you want to know more about the Galaxy S22 models, their expected price, and other details, check out our round-up article.