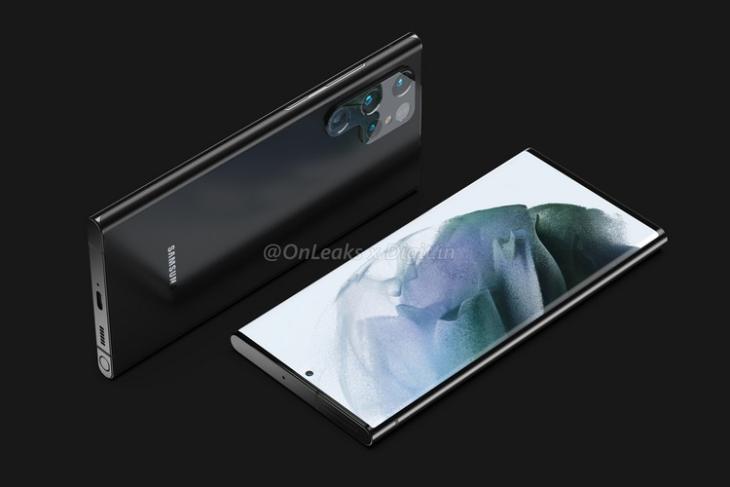 While Samsung may not release another Note device in the future, the company is aiming to bring most of the features to its flagship-grade Galaxy S series. Last week, we saw a report suggesting that the Samsung Galaxy S22 Ultra might come with a built-in S-Pen slot. Recently, a few high-quality renders of the Galaxy S22 Ultra confirms that the device will indeed come with an integrated S-Pen slot.

The leaked high-res renders come from reputable tipster Steve H. McFly (aka OnLeaks) and show off the design of Samsung’s upcoming flagship Galaxy S22 Ultra. While we do not know the specs yet, the dimensions of the device, as provided by the tipster to Digit, are roughly 163.2 x 77.9 x 8.9mm with a 10.5mm thickness. Moreover, the renders also show the S-Pen slot and the unique P-shaped camera module of the upcoming device.

Now, going by the looks, the Samsung Galaxy S22 Ultra reminds us of the Samsung Note series. It will reportedly boast a 6.8-inch curved AMOLED panel with a high refresh rate. It will come with Samsung’s Infinity-O design, which is a fancy name for a top-center punch-hole cutout for the selfie snapper.

At the bottom of the device, you can see a dedicated slot for the S-Pen along with a USB-C port, and the speaker grills. So, it is pretty much confirmed that Samsung will bring S-Pen support for its upcoming flagship as OnLeaks has a solid track record. This might also mean that Samsung is indeed planning to discontinue its Galaxy Note series, now that its Fold devices and flagship S-series device, will come with S-Pen support.

Coming to the P-shaped quad-camera module, looks like Samsung is aiming to up its camera game with the upcoming Galaxy S22 Ultra. Although there is no information about the lenses as of now, one of them seems to be a periscope telephoto lens. Plus, as per reports, the device might feature a 108MP primary lens. However, the tipster also shared another render, which shows a different-shaped camera module. So, Samsung might go with either of them for the final product.

Other than this, the tipster also shared the high-res renders of the standard Galaxy S22 and the Galaxy S22 Plus. While the standard S22 looks like a premium Galaxy S21 FE, the S22 Plus renders show the triple-camera setup at the back, which is similar to the previous models.

All the devices in the Galaxy S22 series will feature the Infinity-O design and reportedly pack Snapdragon 898/ 895 or Exynos 2200 SoCs, based on the region. Furthermore, both the standard Galaxy S22 and S22 Plus might reportedly feature a 50MP primary lens at the back.

So, this is pretty much all the information available about the Galaxy S22 series as of now. However, as we approach the official launch, presumably early next year, we might see more information about the devices show up online. So, stay tuned for more rumors, leaks, and reports in the coming days.