Samsung lifted the covers off its new Galaxy A7 (2018) today and it’s the company’s first smartphone to feature a triple camera setup. Priced starting at Rs. 23,990, the Galaxy A7 joins the ranks of the company’s ever-increasing portfolio of premium mid-range devices.

The new Galaxy A7 (2018) is quite unlike the other premium mid-rangers we’ve seen from the company in the past, and it’s not just because of the impressive triple camera setup. The smartphone is powered by an Exynos 7885 SoC, which falls somewhere between the Snapdragon 636 and the Snapdragon 660 when it comes to performance. Compared to the Snapdragon 450 SoC that the company has been using in earlier devices, the Exynos 7885 should prove to be a significant bump.

The device will be available in two variants, with the low-end variant featuring 4GB RAM and 64GB of internal storage, while the high-end variant will feature 6GB RAM and 128GB of internal storage (Rs 28,990). Both the variants come equipped with a triple slot SIM tray which can house two nano SIMs along with a microSD card for expansion. We had the opportunity to spend some time with the device following the launch event and here are our initial impressions of Samsung’s latest mid-ranger:

The new Samsung Galaxy A7 (2018) deviates slightly from the company’s tried and tested design which is definitely a breath of fresh air. The new smartphone has a very premium all-glass design with Gorilla Glass 3 protection to protect it from everyday scratches and scuffs. It’s a bit more boxy, compared to previous A-series devices and it’s great to hold in the hand thanks to its 2.5D curved class coupled with its 7.5mm thin form factor. 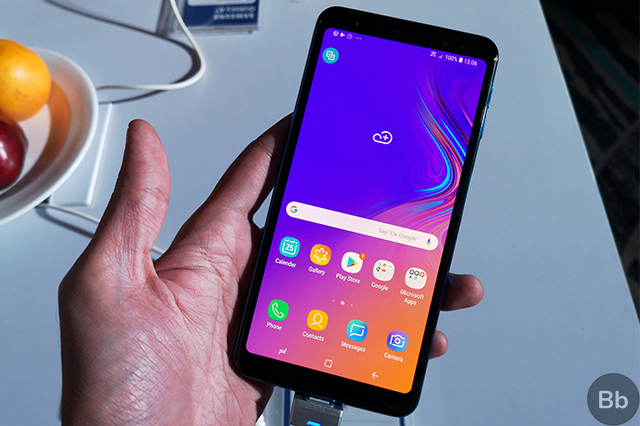 The device features an impressive 6-inch Super AMOLED Infinity display up front with thick bezels on the top and bottom to accommodate the front camera, a front facing flash, the earpiece and sensors up top. The bezels on the sides are relatively slim and aren’t really intrusive.

The back houses the triple camera setup in the top left corner underneath which is the dual-tone LED flash. There’s a Samsung logo bang in the center of the back, but there’s not much else which gives the device a very clean look. However, keeping the look clean would definitely prove to be a challenge as the glass back is a major fingerprint magnet. 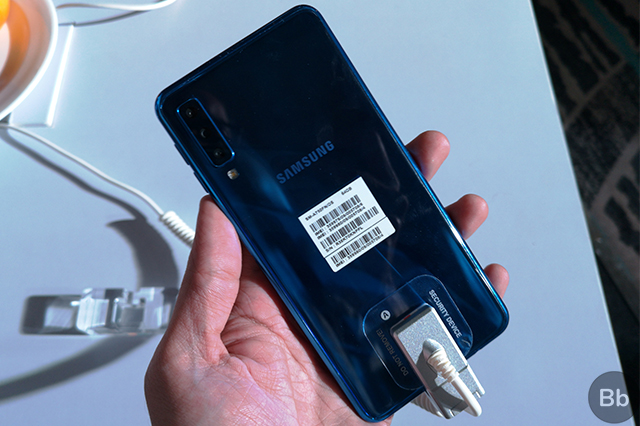 While the placement of the fingerprint scanner might take a bit of getting used to, I believe it is way more ergonomic (at least for right-handed users). 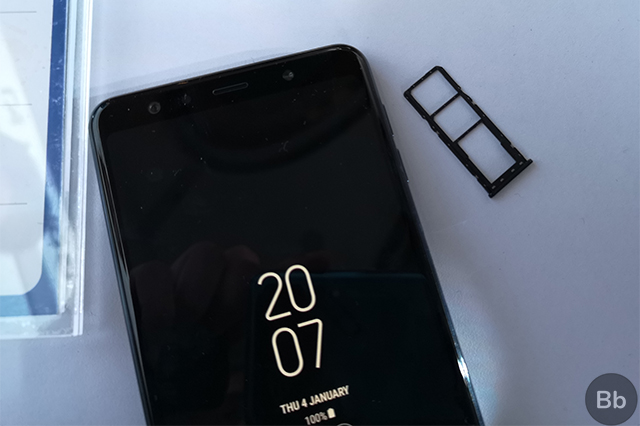 The triple slot SIM tray resides in the left edge of the device and has enough space to house two nano SIM cards and a microSD card slot which supports cards up to 512GB in size. The bottom edge of the device houses the 3.5mm headphone jack, a micro USB port for charging and data syncing (which is a disappointment), and a single downward-firing speaker.

The display gets fairly bright which will definitely aid in sunlight visibility and it’s powered by a Trust Zone technology processor that enables Widevine L1 certification so you wouldn’t have to worry about not being able to watch DRM-protected HD content, such as on the Poco F1. 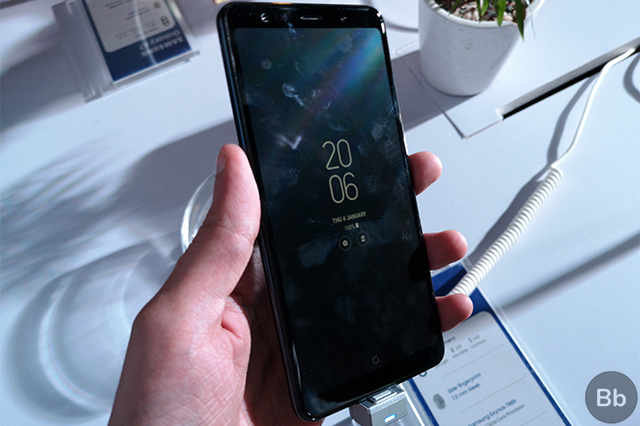 The 2.5D curved display is protected by Gorilla Glass 3 which means that it’s well protected against everyday scratches and scuffs. Much like other Super AMOLED packing smartphones from Samsung, the Galaxy A7 (2018) also features an always-on display feature so you’ll be able to keep up with all your incoming notifications even with the screen turned off.

Coming to the device’s signature feature: its triple camera setup. The Galaxy A7 (2018) packs in a 24MP primary camera coupled with a 5MP lens for depth perception and an 8MP 120-degree ultra-wide lens. All cameras combined, the Galaxy A7 is capable of capturing a wide variety of shots. Up front, the device packs in a 24MP selfie shooter which is assisted by a front-facing flash to assist in low-light captures.

On the software front, Samsung has included a bunch of software optimizations and features to ensure that the device captures great images in almost all scenarios. There’s the Live Focus feature that’s found on a number of other Samsung devices which allows users to capture great portrait shots and edit the bokeh effect at a later stage. 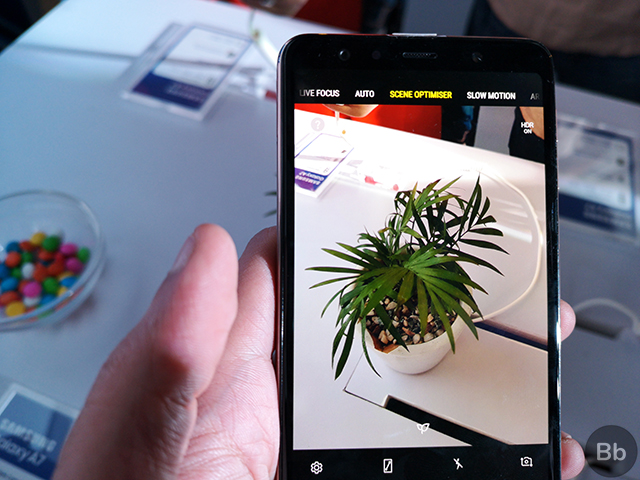 The device also has a AI powered scene optimizer which is capable of adjusting the camera’s performance depending on the subject matter. In order to click great pictures in low-light scenarios, the Galaxy A7 (2018) makes use of Samsung’s Super Pixel technology which combines four adjoining pixels into one ‘Super Pixel’ to capture clear pictures in the dark. The 24MP selfie shooter features a ‘Pro-Lighting’ feature that allows users to edit images in multiple lighting settings.

As mentioned earlier, the Samsung Galaxy A7 (2018) is powered by an Exynos 7885 SoC clocked in at 2.2GHz coupled with 4/6GB of RAM and 64/128GB of internal storage. The internal storage can be expanded up to 512GB using a microSD card and Samsung has introduced a new industry-first solution which gives the device ‘Fully Expandable Memory’. With the Galaxy A7 (2018) users will be able to install apps directly onto their microSD card and transfer all their files onto the card in case they run out of internal storage. 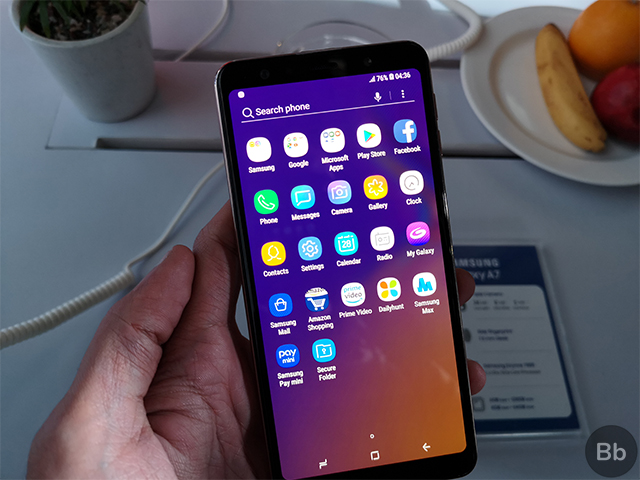 The device includes all the usual connectivity features, including Bluetooth v5.0, 802.11 a/b/g/n/ac dual-band WiFi, and NFC. The internals are complemented by Samsung’s Experience UI built on top of Android 8.0 Oreo.

While I’m not a big fan of Samsung’s software, the company has really toned down on the bloatware this time around. The device I used had a couple of apps pre-installed, including Facebook, Amazon Shopping, Prime Video and Microsoft’s Office Suite, which are more or less quite useful for the average buyer. The device also supports Samsung Pay Mini for instant payments.

The device packs in a substantial 3,300mAh battery which should easily last more than a full day of use on a single charge, however, the company hasn’t highlighted if the device comes with fast charging support, the lack of which could be a major deal-breaker for some.

Samsung Galaxy A7 (2018): Price and Availability

Both variants of the Samsung Galaxy A7 (2018) will be available for purchase via Samsung’s online store, Flipkart and the new Samsung Opera House on September 27 and 28, following which the device will be made available on most other platforms.

The 4/64GB variant of the Samsung Galaxy A7 (2018) has been priced at Rs. 23,990, while the 6/128GB variant of the device has been priced at Rs. 28,990. For the price, the premium mid-ranger is quite a compelling buy, especially because of the new triple camera setup. We will be putting the phone through our usual rigorous review process. Stay tuned for that very soon.