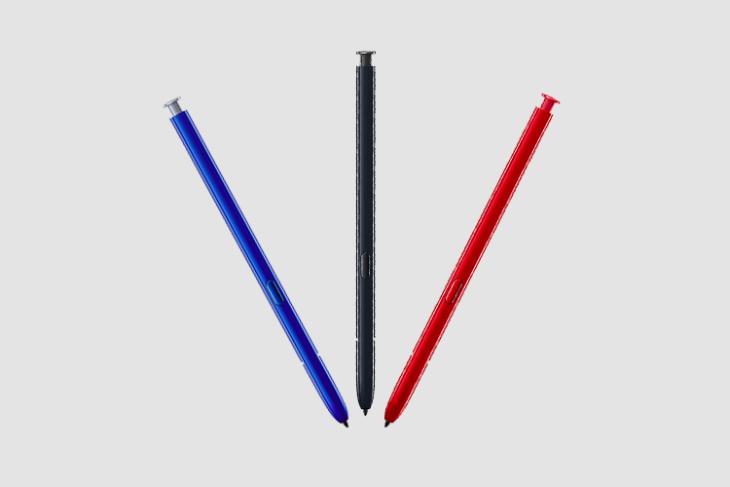 Samsung unveiled its latest flagship smartphones — the Galaxy Note 10 and Note 10+ at an event held in New York yesterday, with the two phones featuring the slimmest form factor in a Note device, and the largest screen on a Note device respectively. However, the stand-out factor of any Note smartphone has always been the S Pen, and this time around, the phones come with an even better, more powerful S Pen. Here’s everything the S Pen will enable you to do on the Note 10 and Note 10+.

New in the S Pen this year, is a bunch of sensors, including an accelerometer and a gyroscope, so you can now control your phone by simply waving your S Pen around like a wand. You can swipe the S Pen in the air to switch between camera modes, use it to skip, or control the volume in the YouTube app, and do a lot more.

Another new feature in the S Pen, thanks to the new sensors, is AR Doodle. Okay, so this is totally a gimmick, but it’s still cool, even if it’s probably not at the same level of gimmicky gimmicks as Apple’s Animoji when they first arrived with the iPhone X. Anyway, with AR Doodle, you can doodle in the virtual world within the camera app to create some amazing designs. Plus, judging by the demo Samsung gave, the AR tracking is really great too. Definitely worth using a couple of times to show it off to your friends.

With screen-off memos, you’ll be able to jot down notes on your Note 10 without having to even turn the screen on. Screen-off memos work on the phone’s display while it’s sleeping, letting you quickly take notes in a pinch.

If you’re recording your Note 10’s screen for sharing, you can use the S Pen to annotate the screen-recording live. It’s pretty handy to highlight or point-out points of interest in a screen recording when you’re sharing it with someone to show-off something in particular.

Even with tools such as Google Translate, translating text on the go isn’t as seamless as one might want. With the S Pen, however, you can just hover over the text you want to translate, and the translations will just pop right up for you. It’s pretty cool.

Plus, you can also hover the S Pen over currencies and units of measurement to quickly convert them.

Obviously, you can take notes with the S Pen. However, the new Notes app now adds a bunch of awesome features to the S Pen. You can quickly highlight text in different colours, and you can even have Notes convert your handwritten notes into text, and export them in apps like Microsoft Word.

Live Messages are also pretty cool, even though they’re also kind of a gimmick. However, with the S Pen, you can edit, write, and draw freely on videos and share them with your friends and loved ones.

If you’ve ever used a Note device, or seen someone else use it, you’ve most likely seen Air Command in action. Air Command pops up an easy to access menu that you can use with the S Pen and now, you get an improved UI, and customizable gesture settings.

So yeah, the S Pen is pretty cool and can improve how you use your Galaxy Note 10. The new S Pen comes with improved 10-hour battery life, and like the Note 9, it charges by simply being slid inside the Note 10. So, are you buying the Galaxy Note 10 or Note 10+? Does the $949 starting price put you off? Let us know your thoughts in the comments.