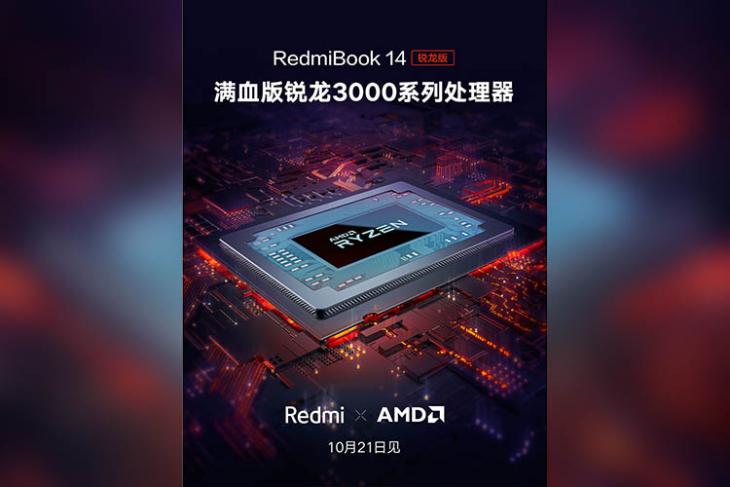 Xiaomi has today confirmed that a new AMD-powered RedmiBook is coming on October 21. The confirmation came by way of a poster which showed that the new RedmiBook series will be powered by the AMD R5 3500U processor.

We’ve been hearing rumours and leaks around an upcoming Redmi device with an AMD processor, and a new RedmiBook was always the most probable answer to those rumours, and as it now turns out, that’s exactly what the company is working on.

This is the first time a RedmiBook will be launched with AMD processors on-board, with the previous RedmiBook 14 using Intel processors instead. AMD’s recently launched line up of processors have impressive multi-threaded performance, which may be one of the reasons Xiaomi is looking to introduce new RedmiBooks with these processors.

According to the poster, the new RedmiBook will not under-clock the R5 3500U processor. With that, the amount of heat that the laptop will generate is going to be a considerable hurdle for performance. It’s safe to assume that since Redmi will offer the AMD R5 3500U processor in the RedmiBook without under-clocking it, the laptop should have improved thermals to dissipate all the heat.

It’ll also be interesting to see the price at which Xiaomi launches these new RedmiBook products. The RedmiBook 14, which was launched earlier this year, was a very well-priced laptop, and with the new line-up of RedmiBooks that Xiaomi is working on, we’re expecting similarly well-priced options from the company.

Anyway, we should find out more details about the upcoming RedmiBook line-up on October 21, when the company officially announces them, and we’ll definitely keep you updated.