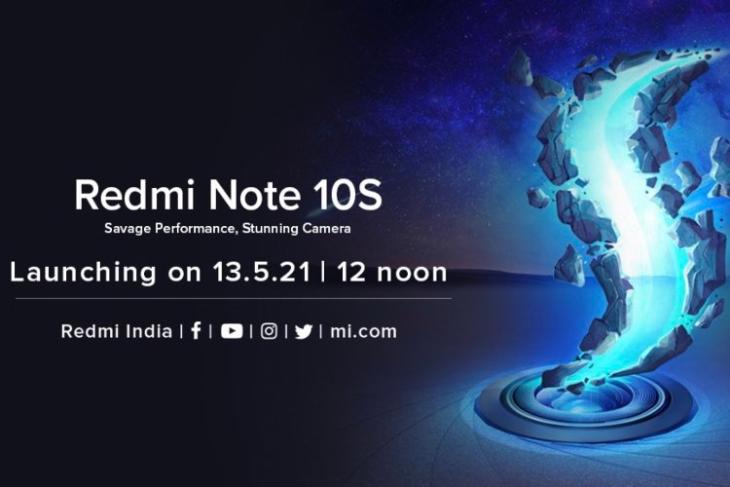 After launching it in the global market in March, Xiaomi is all set to introduce the latest addition to its Redmi Note series of smartphones with the Redmi Note 10S in India. The smartphone launches in the country in 10 days, on May 13, as per a tweet by Xiaomi India MD, Manu Kumar Jain.

Mi Fans, get ready for the most #Savage #RedmiNote of 'em all.

Join us as we unveil this BEAST at a special #LaunchFromHome event on 13th May! 🏡

Under the hood, the phone is powered by the MediaTek Helio G95 processor that has a Mali-G76 MC4 GPU for gaming and graphics. In the global markets, Xiaomi has launched the Redmi Note 10S in three variants: a 6GB/64GB option, 6GB/128GB option, and an 8GB/128GB option at the highest-end. These storages are all UFS 2.2, so not the fastest options out there.

The smartphone will also pack in a quad-rear camera setup. That includes a 64MP primary rear camera. This will be coupled with an 8MP ultra-wide, a 2MP macro, and a 2MP depth sensor. A 13MP front camera for selfies will also be in tow. All of that, with a pretty chunky 5,000mAh battery complete with support for 33W fast-charging will round this phone off as a pretty solid contender in the space.

We don’t know the price that the Redmi Note 10S will be launched at in India. However, it is expected to be within the Rs. 10,000 to Rs. 15,000 price bracket. It will also be interesting to see how the phone fits in alongside the Redmi Note 10 series, which is priced starting at Rs. 12,499.

As mentioned above, the Redmi Note 10S launches on May 13 in India, and we will be covering the launch, so stay tuned for more updates.