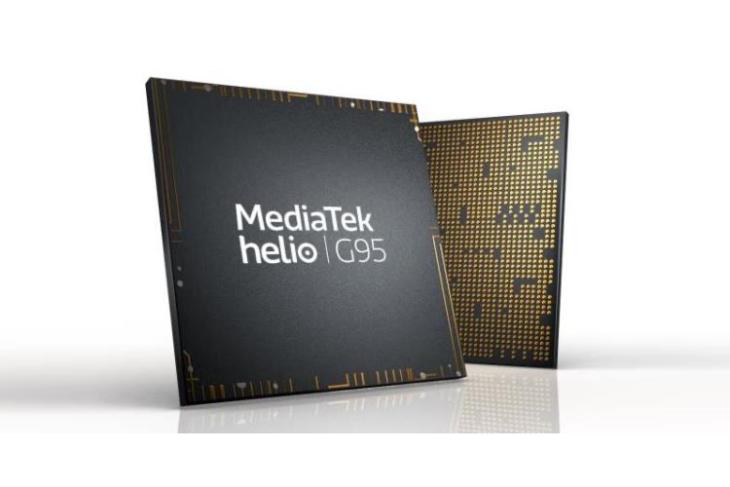 MediaTek has today launched its latest mid-range gaming chipset, the Helio G95. The new processor is an upgrade to the MediaTek Helio G90T which was a fairly powerful processor itself.

The Helio G95 doesn’t change a lot as compared to its predecessor. In fact, it has the same cores as the G90T. You get two high performance Cortex-A76 CPUs running at 2.05GHz and six high efficiency Cortex-A55 cores. It even uses the same GPU — an ARM Mali-G76 MC4. However, MediaTek has overclocked the GPU this time around with a frequency of 900MHz as compared to 800MHz on the Helio G90T. MediaTek claims that this allows the G95 to gain a 5% increase in AnTuTu benchmark scores, and an 8% higher score in Manhattan 3.0.

Obviously, being a gaming focused chipset, it offers certain gaming oriented features as well. The MediaTek HyperEngine technology offers features such as the ability to connect your phone to two routers simultaneously for lower ping. Plus, if you get a call mid-game, your connection won’t drop the way it can sometimes with mobile networks. The chipset also offers a 60% shorter GPU rendering to display latency, and allows for less stutters and lags when playing intensive games.

The Helio G95 can support up to a 64MP camera, and also supports capturing slow motion videos at up to 240FPS with HEVC encoding for smaller file sizes. It can also support dual 24+16MP camera modules.

Rather more interesting is the support for dual wake words. The Helio G95 can listen for two wake-up words simultaneously. This means you can use, for example, “Hey Google”, and “Alexa” interchangeably to launch their respective virtual assistants. This should prove useful if you like using Google Assistant for certain tasks and Alexa for others.

Similar to the Helio G90 and G90T, the G95 will power mid-range phones with a focus on gaming and performance. We can expect smartphone makers to start using this processor in the near future.