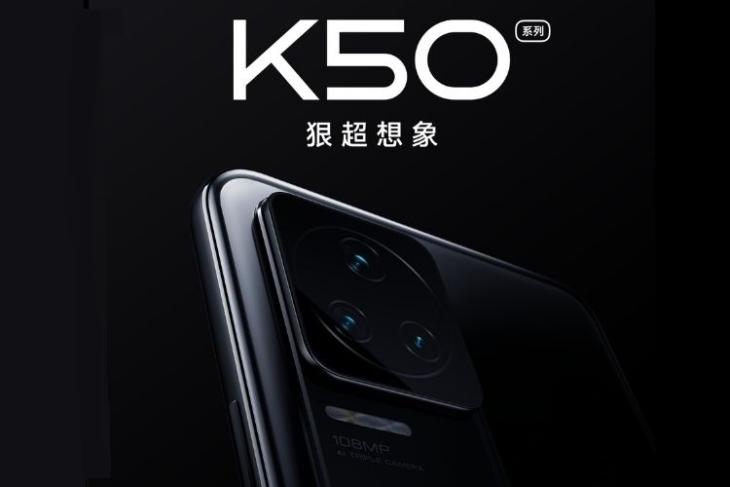 After a bunch of rumors and leaks, we finally have a launch date for the much-awaited Redmi K50 series. Xiaomi has revealed that it will launch the Redmi K50 series, most likely including the Redmi K50, K50 Pro, and K50 Pro+ on March 17 in China. Check out the details.

Xiaomi’s Redmi division shared the news via a recent Weibo post. It was revealed that the Redmi K50 series will launch on March 17 at 19:00 China time, which translates to 4:30 pm IST.

The company also shared an official teaser image, which confirms the Redmi K50’s (and even K50 Pro’s) back panel design. It will come with a rectangular camera hump, which looks similar to the one seen on the Vivo X60 and the Xiaomi Mi 10T phones and was rumored previously. The camera setup will include a small circular camera module to house the three rear cameras. The main camera out of the three is confirmed to stand at 108MP.

It is also revealed that the Redmi K50 Pro+ will be powered by the latest MediaTek Dimensity 9000 chipset, which has reportedly attained an AnTuTu score of 1,041,818. The Redmi K50 Pro is also expected to have the same chipset, while the standard Redmi K50 model could be powered by a Snapdragon 8 Gen 1 mobile platform. You can read how the Snapdragon 8 Gen 1 compares to the Dimensity 9000 in our dedicated article linked here.

All three Redmi K50 models are expected to come with a 120Hz display, up to 120W fast charging support, have various camera features, and a lot more features to offer. However, we don’t have concrete details with us at the moment and shall update you once we get hold of some. In addition, there’s no word on whether or not all the Redmi K50 devices will come with the same form factor.

For those who don’t know, Xiaomi has also announced that it will launch the Redmi 10 in India on the same day. Of course, the timing will differ. To know all about the upcoming Redmi phones, both in China and in India, stay tuned to this space.