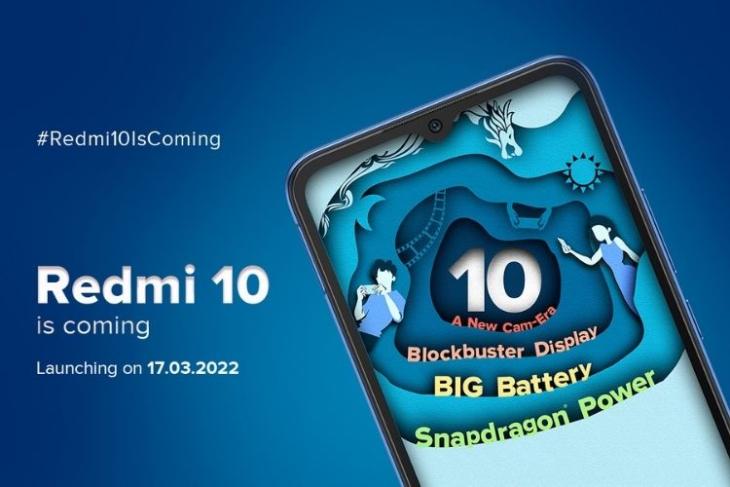 Xiaomi isn’t clearly done launching smartphones in India. After the recent Redmi Note 11 Pro series launch, the company is now shifting its focus to last year’s Redmi 10 series. Xiaomi has now announced that will launch the Redmi 10 in India on March 17. The phone will join the Redmi 10 Prime, which is the rebranded version of the Redmi 10 global variant for India.

Redmi 10 Heading to India Next Week

The Redmi 10 will launch in India on March 17, most likely at an online event. Since Xiaomi held a physical event for the Note 11 Pro earlier this week, one can’t tell. The company has revealed a few details about the upcoming device in teasers, suggesting that it will focus on the cameras, display, and the battery backup, on a budget.

As per the Redmi 10 landing page, it will come with a different design with a smudge-free back finish. It also has a square-shaped camera bump, which also includes a fingerprint scanner (much like the Realme Narzo 50A). Now, this feels new after a slew of phones with a side-mounted sensor. Redmi has also confirmed the presence of a waterdrop notched display, as shown in the official tweet below. This is different from the Redmi 10 Prime, which launched with a punch-hole screen and a Redmi Note 10-like camera setup.

It is also revealed that there will be a 50MP main AI camera, which is also seen on the Redmi 10 Prime. The Redmi 10 is also confirmed to be powered by a 6nm Snapdragon chipset unlike the MediaTek Helio G88 SoC on the Prime edition. There’s no word on which SoC will the Redmi 10 will launch with, though.

Other details include a big display and battery, ultra-fast storage, and fast charging support. The smartphone is expected to fall between Rs 10,000 and Rs 15,000 in India, much like the Redmi 9, which is its predecessor and even the Redmi 10 Prime.

To recall, the Redmi 10 Prime includes a 90Hz display, a MediaTek Helio G88 SoC, a big 6,000mAh battery with 18W fast charging, 50MP quad cameras, expandable RAM, and more. It remains to be seen what new features the Redmi 10 will include. We shall know more details in the coming days, so stay tuned.