Xiaomi strives to stay a step ahead of its competitors while keeping its prices honest and is mostly the first one to adopt new chipsets which land in the market. In line with the same, the Redmi K20 is the first smartphone to launch with the Qualcomm Snapdragon 730 chipset. Well, we recently visited Xiaomi’s flagship ‘Mi Store’ in Shenzhen, China and have got our hands on the Redmi K20 series that’s expected to launch in India early next month.

There’s a ton of interest around the Redmi K20, simply because of the boatload of great features and the entry of a Snapdragon 730 chipset-powered smartphone in India really soon. This is our first interaction with a Snapdragon 730-powered device as well, thus, it’s only obvious to run a number of benchmark tests and give you a taste of how powerful Qualcomm’s new mid-range chipset is. 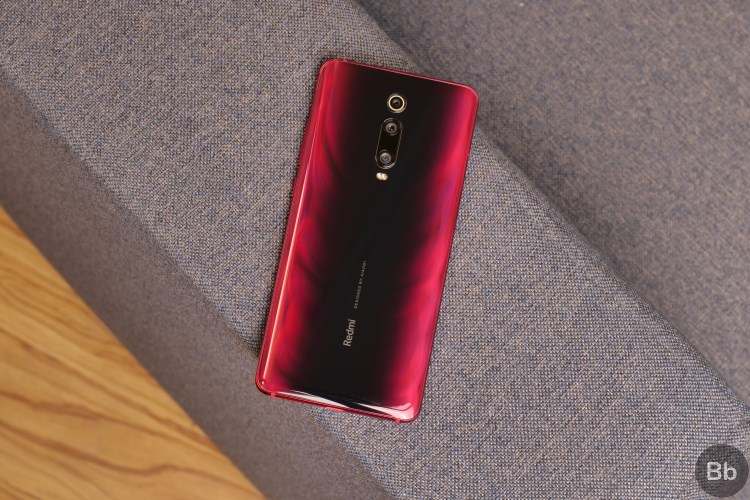 Let’s first talk about what makes the Snapdragon 730 chipset and then take a look at all the benchmark scores. Snapdragon 730 is an octa-core 8nm chipset. Yeah, it’s using the latest 8nm node architecture for improved power efficiency and packs the Kryo 470 core clocked at up to 2.2GHz. This is paired with the Adreno 618 GPU, Hexagon 688 DSP, and the Snapdragon X15 LTE modem.

Now the moment you’ve all been waiting for, the benchmarks. The AnTuTu benchmark score of the Redmi K20 is 216696, which means the Snapdragon 730 chipset is a lot powerful than the other Snapdragon 600- and 700-series chipset that launched before it.

Next up is Geekbench and well, be ready to be surprised. The single-core score of the Redmi K20 is 2534 while the multi-core score stands at 7001. This means Snapdragon 730 is considerably ahead of the Snapdragon 710 chipset we saw in the Realme 3 Pro and is also slightly better than the Snapdragon 675 chipset that’s packed inside the Redmi Note 7 Pro and Galaxy M40. However, the essential thing to note here is that it’s also on par with the Snapdragon 845 as well. 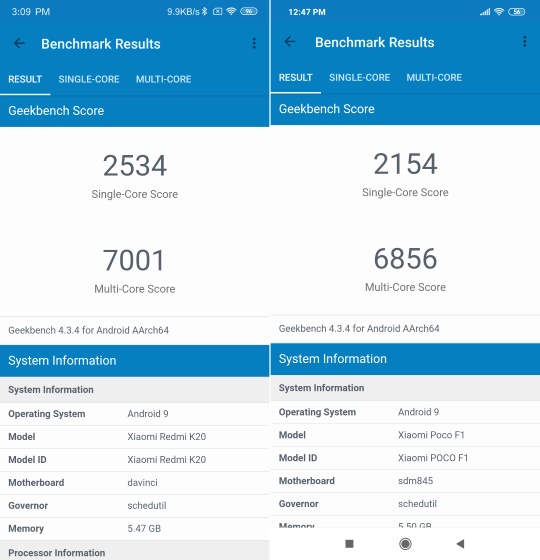 Yeah, I decided to pit the Redmi K20 against the much-loved Poco F1 as it’s expected to launch at a similar Rs 20,000 price point. Well, I found that the Kryo 470 core inside the Snapdragon 730 SoC, even though it’s clocked at a lower frequency, results in a higher Geekbench score than the Kryo 385 in the Snapdragon 845 chipset. This is bonkers and may be difficult to comprehend for Poco fanboys, but the mid-range Snapdragon 730 is certainly on par (or even better) than the flagship Snapdragon 845 chipset. 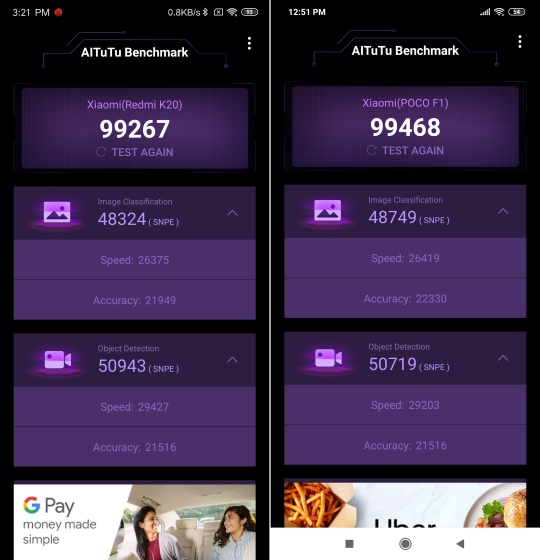 To test out the graphics performance of the Adreno 618 GPU on the Redmi K20, we ran both the Slingshot Extreme and Ice Storm Extreme benchmark tests on 3DMark on the smartphone. You can find the results for both the tests attached below: 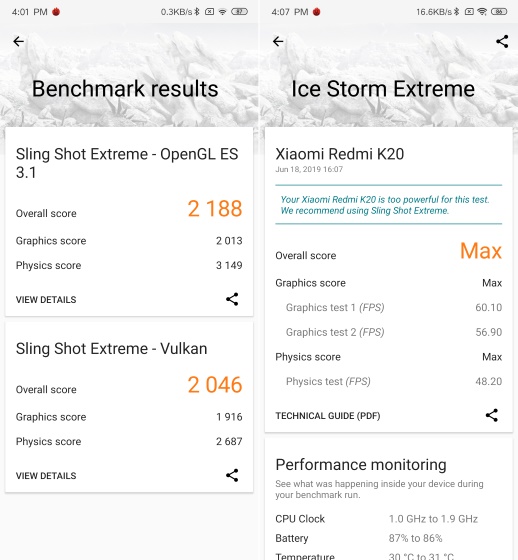 Since benchmark scores aren’t really enough to justify the gaming performance, we’ve installed PUBG Mobile on Redmi K20 Pro and it runs on high graphics setting by default. I played a couple of Team Deathmatch games as well and didn’t notice any lag and stutter in the gameplay.

Finally, we also ran the PCMark benchmark on the Redmi K20 to test out the performance on the Snapdragon 730 chipset and well, the results are right in front of you. Snapdragon 730 has scored above 8300 on the Work 2.0 performance bench and it’s above average in terms of overall performance, so I don’t think one should be worried about issues in day-to-day use or multitasking. 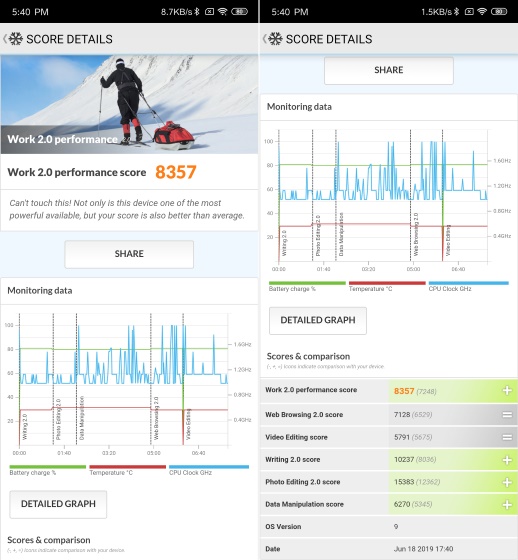 Well, there you have it. All of the major benchmark scores for the Snapdragon 730 SoC, and it has turned out to be a pretty worthy upgrade to the existing Snapdragon 710 and Snapdragon 712 chipsets. It can also become a much-needed alternative for the flagship Snapdragon 845 chipset in the mid-range smartphone segment, giving players like Poco the opportunity to push the envelope on pricing.

The new Snapdragon 730 chipset brings more flagship-grade features to the mid-range segment, giving users who’ll buy smartphones backed by this chip a smooth and stutter-free experience. So, what are your opinions on the benchmark score of the Snapdragon 730 chipset? Does it measure up to be worthy of your recognition? Let us know in the comments down below.