Skip to content
Home News Realme Takes a Swipe at Redmi K20 With ‘Kill the Hype, Let’s be Real’ Campaign 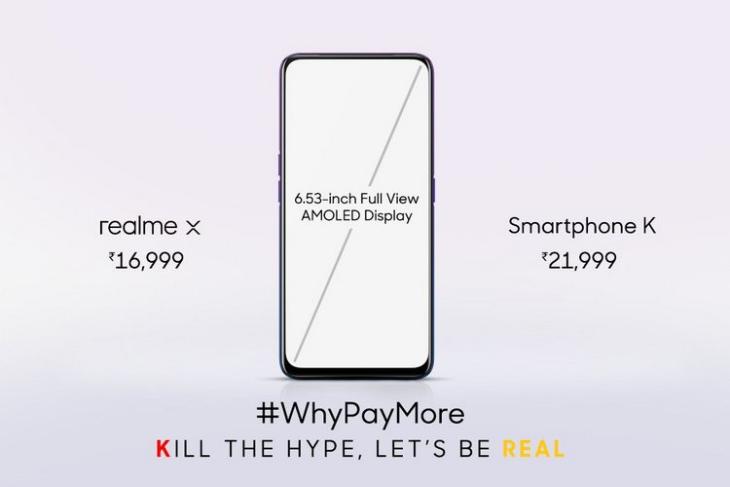 To counter the intense media hype over the Redmi K20 and K20 Pro launch in India on Wednesday, Realme probably felt it needed to up its social media game to let prospective customers know that it intends to take Xiaomi’s latest offerings head-on with its all-new mid-ranger, the Realme X. To steal Xiaomi’s Redmi K20 thunder, Realme on Wednesday launched a ‘Kill the Hype, Let’s be Real’ campaign on social media to assert that its new phone is actually an overall better value proposition than either of Xiaomi’s latest offerings.

As part of its plans, the company took to Twitter to highlight the price difference between the Redmi K20 and the Realme X, without ever mentioning the Xiaomi phone by name. As seen below, the company highlighted that the Realme X, launched earlier this week for Rs. 16,999 onwards, is notably cheaper than ‘Smartphone K’, which comes with a starting price of Rs. 21,999.

#WhyPayMore, when you can enjoy a crystal clear and colourful Real Full Screen display for a lesser price? Enjoy a 6.53” FHD+ Super AMOLED Full Screen Display on #realmeX starting at ₹16,999.

Just to recall, the Realme X will go on sale from July 24 on Flipkart and on Realme’s website, with a hate-to-wait sale scheduled for today. The base variant with 4GB of RAM and 128GB of internal storage has been priced at Rs. 16,999, whereas the high-end 8GB+128GB variant comes with a Rs. 19,999 price-tag. The new Realme X Spider-Man: Far From Home Edition with the top-end configuration, custom ColorOS 6 skin and case will cost you Rs. 20,999.

As for the Redmi K20 twins, the phones come with a large Full HD+ display, a pop-up camera on the front and triple cameras on the back. Minor differences between the two include a Snapdragon 730 in the standard K20 instead of the Snapdragon 855 in the Pro version. Apart from this, the primary 48MP Sony IMX586 image sensor in the K20 Pro made way for another 48MP sensor from Sony, the IMX582, but without support for 4K@30fps video recording.