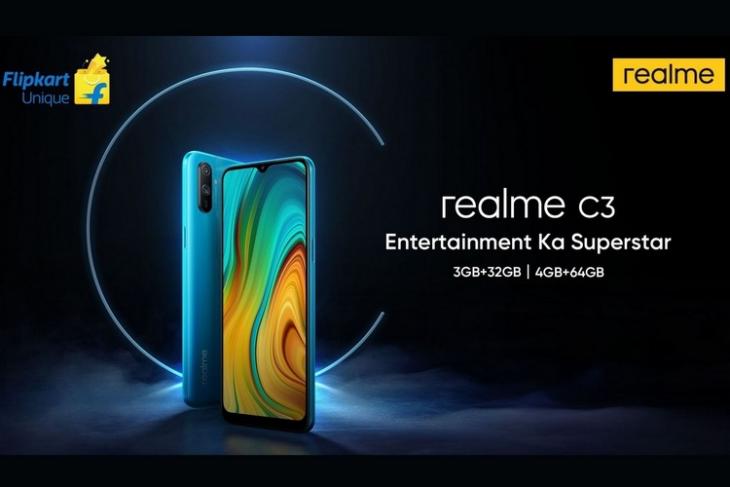 Realme CEO, Madhav Sheth, started teasing the Realme C3 on social media yesterday, and while many of us expected the company to actually go ahead and launch the device this week itself, it now turns out that it will actually happen next month. The company has started sending out media invites for the launch event scheduled for February 6. The company will also live-stream the event on Facebook and YouTube from 1:30PM.

Meanwhile, a week ahead of its official availability, the device has been listed on Flipkart, revealing its features and tech specs. According to the listing, the Realme C3 will feature a 6.5-inch display with Corning Gorilla Glass protection and 89.8 percent screen-to-body ratio. The resolution remains unspecified, but the screen will have a teardrop notch to house the front camera.

The Realme C3 will be powered by the recently-announced Helio G70 SoC, and will be offered in two configurations – 3GB+32GB and 4GB+64GB. Other hardware specs include a 5,000mAh battery that the company says will offer 30-days standby, 20.8 hours of YouTube streaming, 19.4 hours of music streaming, 43.9 hours of voice-calls and 10.6 hours of PUBG gaming. There is, however, no visible fingerprint scanner on the device, so it will be interesting to see how that plays out going forward.

On the imaging side of things, the device will ship with a dual-cam setup at the back, including a 12MP primary sensor with features like Chroma Boost, slow motion video and HDR mode. The device will also have a Panorama selfie mode, revealed the listing. There’s no official word on the secondary image sensor or the selfie-cam just yet, but we should get all that info next week.