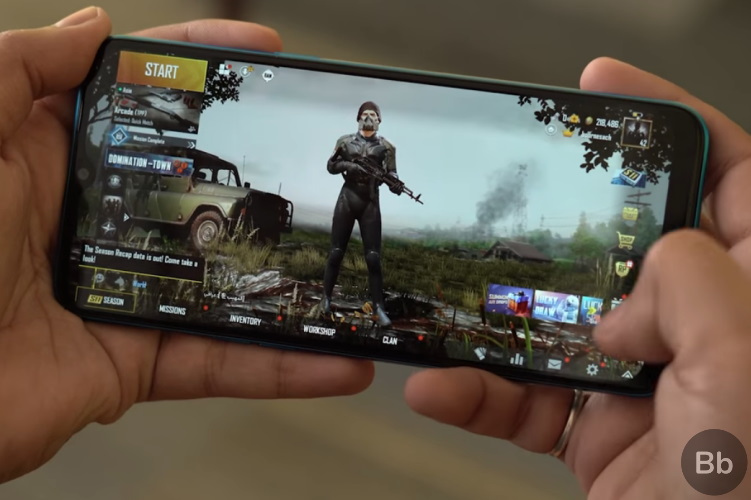 The competition between Xiaomi and Realme has only grown more intense over the past year. The latter is now also offering a smartphone at almost every price point to aggressively rival its arch-nemesis. The latest addition to Realme’s lineup is the entry-level Realme C3, which was launched earlier this week in India. It’s the world’s first smartphone to be powered by the MediaTek Helio G70 chipset.

If the users weren’t interested in the Realme C3 prior to launch, well, the Helio G70 has given us reason enough to not give a casual pass. This was my first interaction with this new budget-centric gaming chipset, so I thought it was the perfect opportunity to run a myriad of benchmarks tests. They give us a taste of what the MediaTek Helio G70 has to offer and whether it’s good for daily use, as well as gaming. 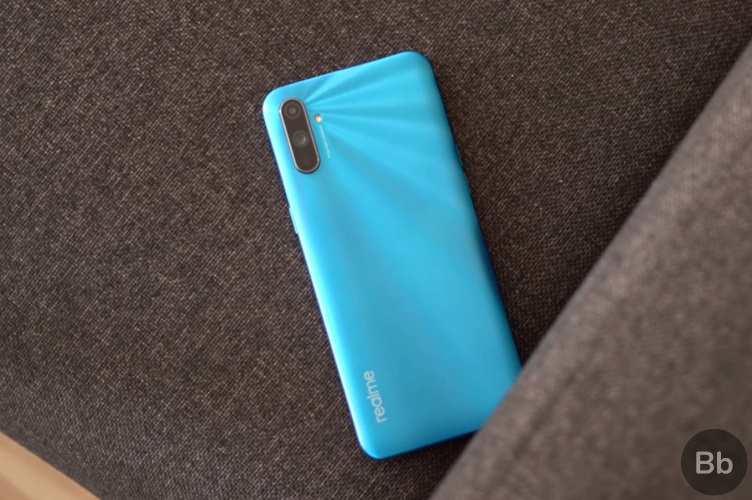 Before we take a look at the different benchmark scores, let me quickly brief you about MediaTek Helio G70’s specs. It’s an octa-core 12nm chipset with 2 high-performance Cortex-A75 cores clocked at 2.0GHz and 6 Cortex-A55 cores clocked at 1.7GHz. This chipset also includes the ARM Mali-G52 GPU clocked at 820MHz, along with MediaTek’s HyperEngine Game technology and AI capabilities.

First up, we have the AnTuTu benchmark score of the Realme C3. As you can see in the screenshot below, the MediaTek Helio G70 scores 191731 and sits squarely between two of the most popular Snapdragon 600-series chipsets in the budget segment. I mean, the Helio G70 chipset is definitely more powerful than the Snapdragon 665, but it’s certainly no match to the Snapdragon 675. 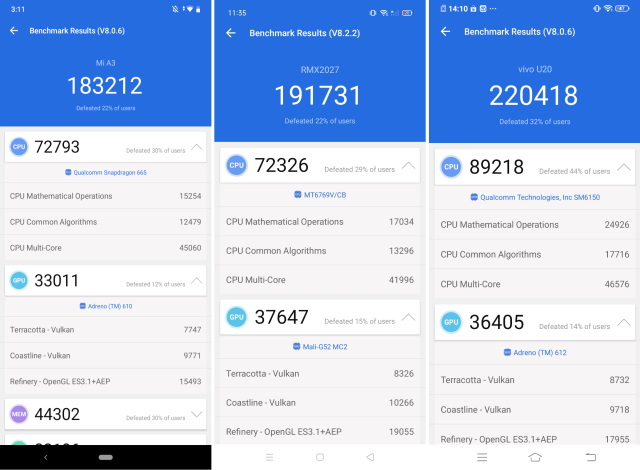 So overall, you can say that the MediaTek Helio G70 chipset is powerful than the Snapdragon 665 on paper.

Moving on to Geekbench, the final outcome is pretty much the same as above. MediaTek Helio G70 has a single-core score of 251 and a multi-core score of 1256. This means the Helio G70 is comparable to Snapdragon 665 in terms of processing power and it still sits below Snapdragon 675, which is probably the most loved chipset in the sub-Rs. 15,000 price segment. 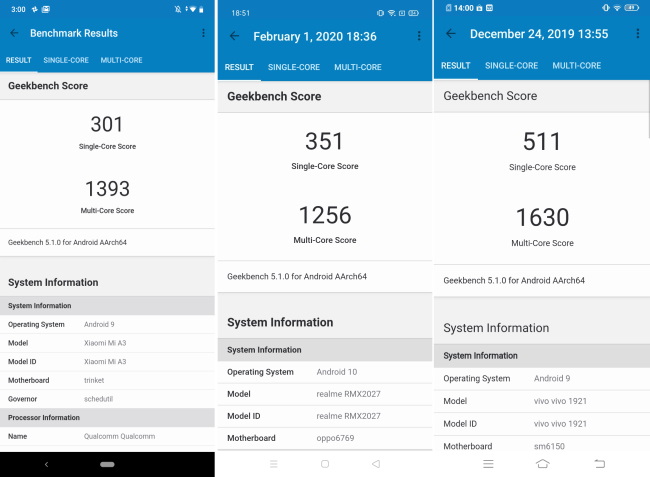 As you can see in the screenshots above, I ran the benchmark test on the Realme C3 for the MediaTek Helio G70, Xiaomi Mi A3 for Snapdragon 665, and Vivo U20 for Snapdragon 675. Even though both the Helio G70 and Snapdragon 665 are clocked at up to 2GHz, the former has a better single-core score because of the newer Cortex-A75 cores used in this chipset. Snapdragon 665 uses the previous-gen Cortex-A73 cores.

Since smartphone’s today rely on artificial intelligence (AI) for a myriad of features, it is only natural for us to benchmark the AI capabilities of the MediaTek Helio G70 chipset. I mean, the chipsets these days are packed with some super capable AI engines, but that doesn’t seem to be the case here. 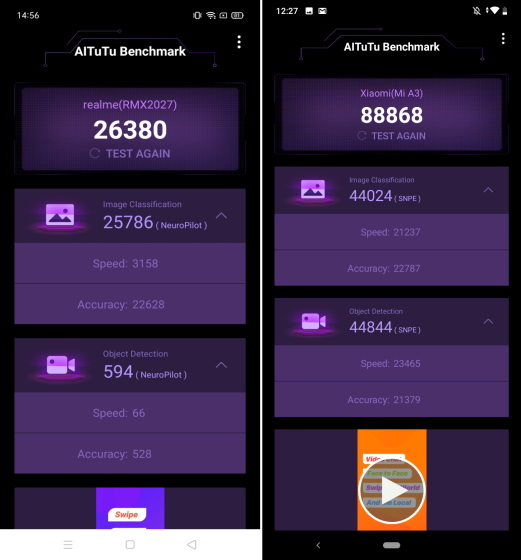 MediaTek touts that the Helio G70 chipset has ‘fast AI performance,’ ideal for AI-camera tasks but the AITuTu benchmark score attached above doesn’t reflect the same. You can see that Qualcomm’s AI Engine is far ahead in this segment.

Since benchmark numbers are not enough to offer you an idea of how a game runs on Realme C3, so we installed some of the popular games like PUBG Mobile, Call of Duty: Mobile, and Asphalt 9 on this device. Let’s take a look at how they perform –

When you first power-up PUBG Mobile on the Realme C3, you will be shocked to see that the game assumes high graphics settings by default. I know, I did not expect that from a budget MediaTek chipset. I was skeptical of the performance but yeah, PUBG Mobile runs smoothly at high graphics. There’s no noticeable frame drop or lag when playing the title, which is amazing at the sub-Rs. 8,000 price point. 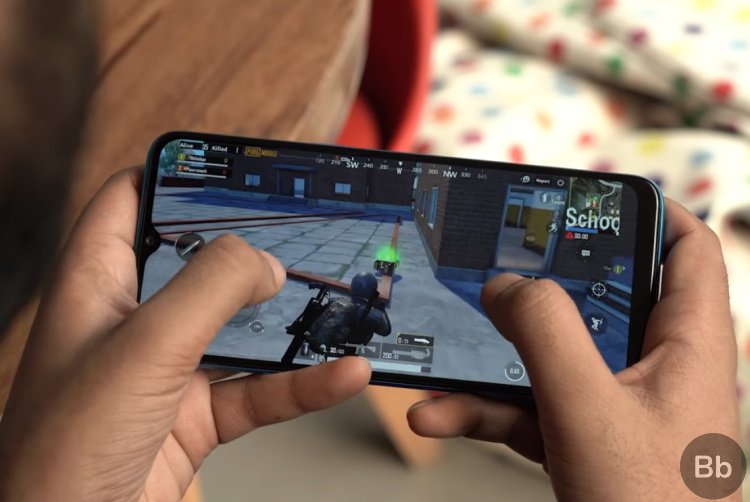 But wait, let me blow your mind. The Helio G70 even supports PUBG Mobile at Ultra graphics on the Realme C3. Yeah, this was the second blow for me but I surely powered through and to my surprise, the phone handled it like a champ. We used the GameBench app to test the FPS, battery usage, and other things. Well, as you see in the screenshots below, PUBG Mobile runs at a consistent 40FPS on this Rs 7000 phone, which is amazing.

We also played some Call of Duty and Asphalt 9 on this smartphone and ran into a rather confusing-curious situation. It’s only PUBG that seems to have been optimized via the Game Space feature in Realme UI to run at high graphics, which is really weird. This phone can possibly run games at higher settings if Realme chooses to optimize the game experience.

Call of Duty assumes medium frame rate and low graphics quality by default but the title runs pretty smoothly for an entry-level phone. No frame drops or stutters are noticeable and I got an average of 56 fps on GameBench, as you can see in the screenshots above. Asphalt 9 is also capable of running at high graphics. Minor stutters and lag are seen but you won’t be disappointed by the overall experience.

We also did some thermal testing while we were at it and you can check it out in our first impressions video of the Realme C3 on YouTube right here:

MediaTek has outgrown its Helio A- and P-series chipsets that once dominated the entry-level and budget segment. The Helio G70 chipset, which primarily focuses on gaming performance is a breath of fresh air in the entry-level segment in India. I mean, we’ve seen PUBG Mobile running at Ultra graphics settings on a sub-Rs 8,000 smartphone and that’s amazing.

Realme is only the first adopter, but we can expect to see a number of phone makers to bake the Helio G70 chipset into their smartphones. Well, Redmi 9A is expected to launch next week with this chipset in tow and that has me quite excited. So, stay tuned as we’ll bring you a close look at the Redmi 9A (whatever chipset it may sport) next week.