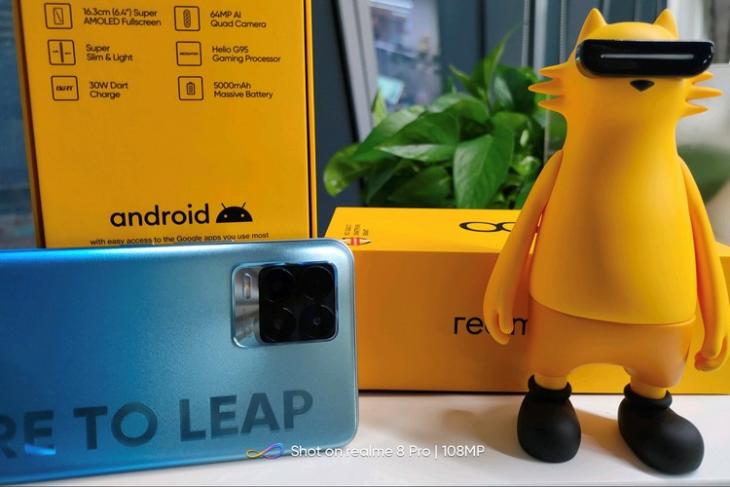 After teasing the Realme 8 Pro and boasting about its 108MP camera at its Camera Innovation event yesterday, Realme has now officially shared an image of the Realme 8 retail box. It reveals some of the key specs of the lower-end model in the upcoming Realme 8 series. We have also got a closer look at the Realme 8 Pro’s rear panel.

The company is gearing up to launch the Realme 8 series in India later this month. But, ahead of the official launch, Realme India CEO Madhav Sheth shared a picture of the Realme 8 Pro on Twitter. What caught our attention, however, is the retail box in the background. It appears to be for the Realme 8 and not the Pro variant because Helio G95 does not support up to 108MP cameras. You can check out the tweet right below:

Now, the retail box reveals some of the key specs of the Realme 8. For starters, it will feature a tall 6.3-inch Super AMOLED display. It appears to support the standard 60Hz refresh rate as there’s no mention of a higher refresh rate on the box.

Turning our attention to the quad-camera setup at the back, the Realme 8 will pack a 64MP primary sensor with AI-based software improvements. Although this will be lower than the 108MP sensor on the Pro variant, it is still better than many other smartphones available in the market.

Now, at its core, the Realme 8 will rock a MediaTek Helio G95 gaming-focused SoC. It is the same processor which powers the company’s Realme 7 smartphone from last year. Although there are no details on the RAM and storage option, we expect it to come in a 4GB + 64GB and a 6GB + 128GB variant.

Inside, you also have a massive 5,000mAh battery pack with 30W fast-charging support out-of-the-box. The company aims to launch the Realme 8 along with the Pro variant sometime in March.