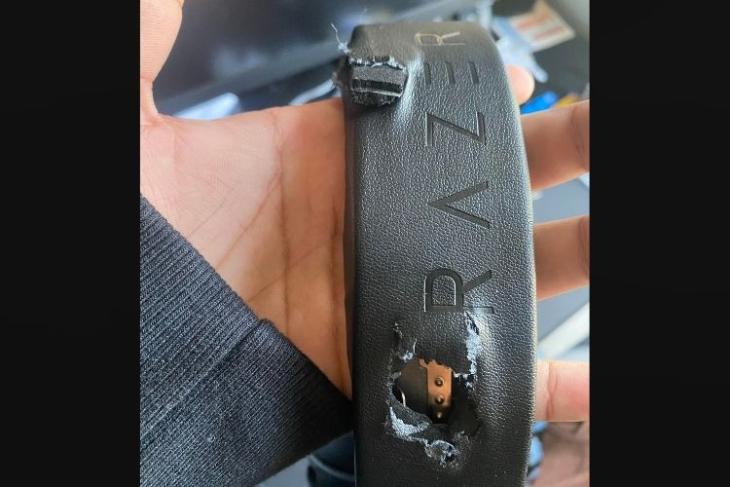 Back in 2020, in an unusual turn of events, a Californian man was saved from a stray bullet by a Microsoft Surface Book laptop. And now, something similar has happened and the device to save this lucky teen is a pair of Razer Kraken gaming headphones, which deflected an incoming stray bullet. Check out all the details below.

A Redditor named u/Enough_Dance_956 recently took to the official Razer subreddit to report that his Razer headphones deflected a stray bullet that came through the user’s window. Although the headset did not survive the blow, it was able to divert the bullet away from the user, saving his life in the process.

The Redditor shared an image (attached below) of his damaged headphones with the bullet mark on the top of the cushioned headband.

As per the Redditor, the bullet came towards him and hit the top of the headset, shattering the headband. The bullet was then deflected towards a wall and finally landed on the user’s bed.

Now, after the Redditor posted the initial image with his story, many users believed it was a prank, as the timing of the post was near April Fool’s day. However, u/Enough_Dance_956 further clarified the story by sharing some more pictures. The new images show the shattered window glass through which the bullet came in. The user also shared an image of the bullet lying on his bed.

Following his initial post, Razer’s CEO Min-Liang Tan shared his reaction via a comment on the original post. Tan exclaimed that it was “crazy” and stated that he is glad that the user is okay. Furthermore, the Redditor said that he filed a police complaint after the event and confirmed that the police has taken the bullet into custody. As for the source of the bullet, it is unclear to whom it belonged, but it came from a block away.

The company also offered to replace the Razer headset but the user refused and told that the post was only meant to thank Razer. So, what are your thoughts on this incident? Let us know in the comments below.