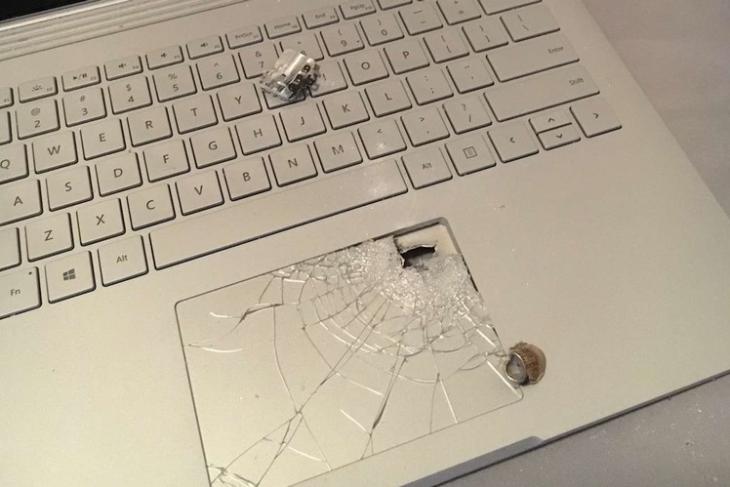 Although the Surface Book laptops are really well-built, no one knew that Microsoft’s creations can stop a bullet. Yes, you heard that right. We have finally found a worthy competitor for the legendary Nokia 3310!

So, in a recent turn of events for a Twitter user, Aaron (@itsExtreme_), a stray bullet came through the floor of his apartment, went through his bed, and finally stopped when it hit the Surface Book laying on the bed. The user shared a tweet (below) about this unusual incident, thanking Microsoft for “literally” saving his life.

Aaron’s tweet suggests that he might have been in close proximity to the bullet when it hit the laptop. The Surface Book got shattered by the impact, of course, but it also saved the life of its owner by stopping the bullet.

Now, if you didn’t already know, Microsoft makes the chassis of Surface Book laptops with machined-magnesium, which is surely a tough material. But, I am sure Microsoft testers do not fire an actual gun to test if their devices are bullet-proof or not.

Well, what Microsoft testers could not do, Aaron unknowingly did that. He successfully proved that Surface Book laptops can actually stop a bullet fired from an actual gun. It should, however, be absolutely clear that you should not fire a bullet at the laptop from point-blank range. The bullet passes through a wall, a bed, and then it hits the Surface Book in this case.

Now, you might be thinking where did the bullet actually come from out of nowhere? Well, there is no confirmation but Aaron suspects that his neighbor accidentally fired his gun while cleaning it. Totally normal!

So, I personally think Aaron has two new problems to think about after getting saved – a new laptop and more importantly, a new apartment, where there are no bullets flying around.