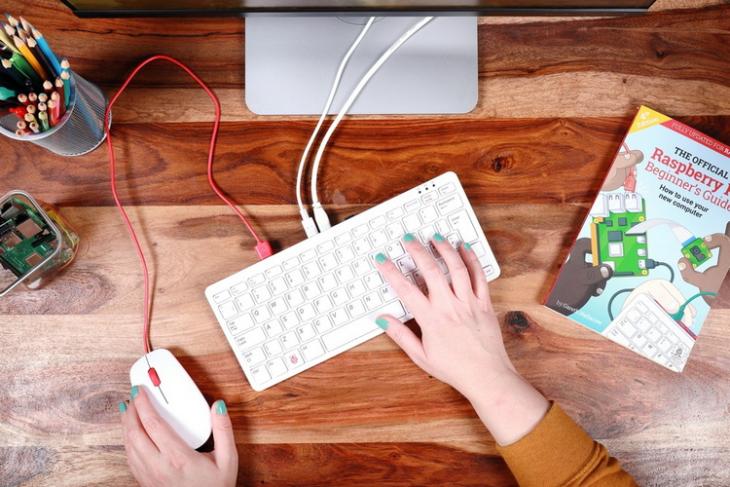 Raspberry Pi Foundation has announced Raspberry Pi 400, the company’s all-new compact personal computer built right into a sleek keyboard. The product is inspired by the classic PCs of the 1980s such as BBC Micro, ZX Spectrum, and Commodore Amiga.

Raspberry Pi 400 integrates the 4GB variant of the popular Raspberry Pi 4 that backs a lot of DIY projects. That translates to the presence of a 1.8GHz quad-core Broadcom BCM2711 Cortex-A72 (ARM v8) 64-bit SoC and 4GB of LPDDR4-3200 RAM. However, it would’ve been nice to see the recently-launched 8GB RAM variant.

In terms of connectivity, the Raspberry Pi 400 comes with dual-band Wi-Fi and Bluetooth 5.0 with support for BLE. The ports on the Raspberry Pi 400 include 2 USB 3.0 ports and a single USB 2.0 port, a Gigabit Ethernet port, a horizontal 40-pin GPIO header, 2 micro HDMI ports that support up to 4K at 60 frames per second, a USB-C power port, and a microSD card slot.

You can either purchase just the Raspberry Pi 400 unit or the complete kit that ships with the official USB mouse, USB-C power supply, an SD card with pre-installed Raspberry Pi OS. a micro HDMI to HDMI cable, and the official Raspberry Pi beginner’s guide.  There are English (UK and US), French, Italian, German, and Spanish keyboard layouts to choose from.

If you’re in the US or UK, you can grab the Raspberry 400 right now. The foundation expects approved resellers in India, Australia, and New Zealand to have the kits and computers ready by the end of the year. It will be globally available in early 2021.