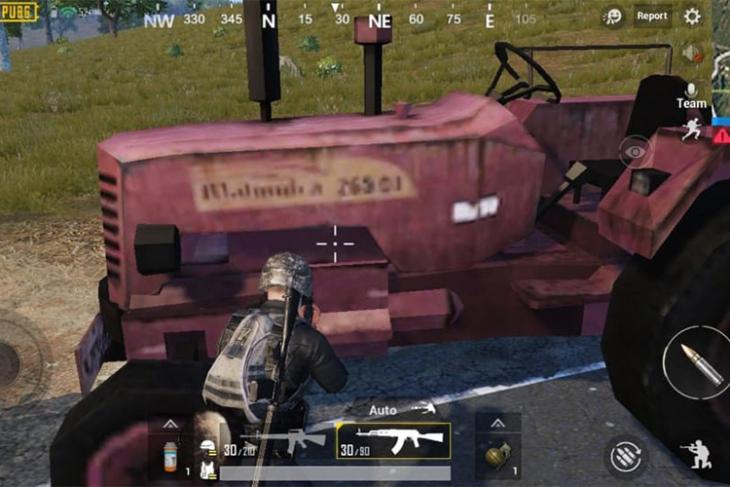 PUBG or PlayerUnknown’s Battlegrounds is already quite popular in India and its popularity in the country is expected to soar even further in light of recent events. A number of Indian PUBG players recently spotted a Mahindra-made tractor in game – the Mahindra 265 DI to be exact – and have taken to Twitter to share screenshots with the chairman of the Mahindra group – Anand Mahindra.

According to a recent report from The Indian Express, the tractor was first spotted in one of Twitch streamer Chocotaco’s streams and since then a number of players have shared different pictures of the tractor on Twitter. The players were elated by the fact that a prominent Indian brand was associated with a game that is being played by millions worldwide and couldn’t contain their emotions. Lets take a look at some of the tweets shared by PUBG fans in India:

Hey Mr. @anandmahindra , have u heard about the sensational game @PUBG
I felt really proud when I saw Indian tractor Mahindra 265 DI in it. pic.twitter.com/12REbppjv7

@anandmahindra I am the only one to notice Mahindra 265 DI tractor in #PUBG_MOBILE #proudmoment pic.twitter.com/2ICNEJWqvn

@anandmahindra Look what I just found, even the game PUBG (I am sure you wouldn't know coz of your work schedule and time deficit), our very own Mahindra 265 DI (they did try to blur it though). My father still is proud owner of own. pic.twitter.com/e3nFm8Rb2n

While a number of PUBG fans were excited by the rare find, Anand Mahindra was naturally quite oblivious of the game. In a tweet regarding the same, the Mumbai-based business tycoon said:

Ok, I admit I’m embarrassed. I try to keep abreast of the latest happenings in the world but what on earth is PUBG? And of course I’m pleased a Mahindra tractor figures in it. What happens to the tractor, by the way? https://t.co/AtRh3Woz62

Delighted by Mahindra’s reply to their tweets, PUBG fans wasted no time in answering his queries. While some answers were quite informative and might have given Mahindra a fair idea of the game, a lot of others were quite troll, as we’ve now come to expect from Indian Twitter users. Here are few of the replies:

Nothing it needs service only😀😄 . For being not used for long time😅, I tried to start it pic.twitter.com/jfmQ4B56b8