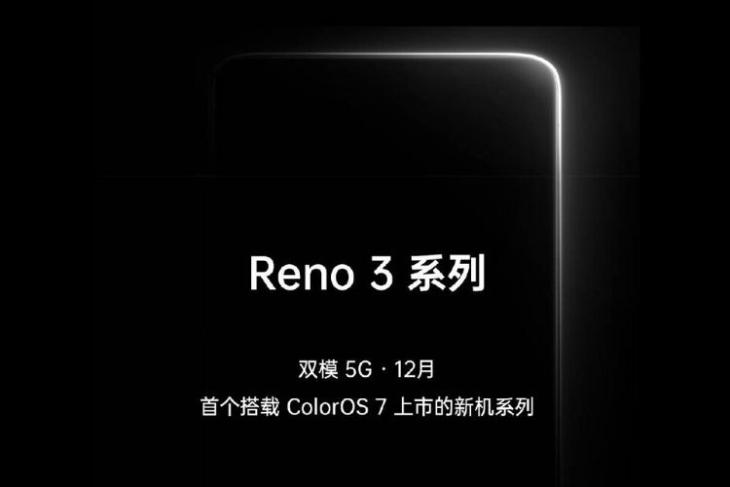 Wasn’t it just last month that Oppo launched the flagship Reno Ace? Yes, it has merely been a month since the debut of the last Oppo Reno phone and the Chinese giant has today teased the launch of the next one. Alongside the unveiling of ColorOS 7 in China, Oppo revealed on stage that the Reno 3 series will launch next month.

As you can see in the teaser above, Reno 3 series will be the first from Oppo to debut with dual-mode 5G support (standalone and non-standalone). It will also be Oppo’s first-ever phone to come with ColorOS 7 custom skin out-of-the-box. This means Oppo Reno 3 will most likely be powered by the unannounced Snapdragon 735 chipset.

Snapdragon 735 is expected to be the first Snapdragon 700-series chipset to debut with an integrated 5G modem onboard. We believe it will be launched early next month, alongwith Qualcomm’s Snapdragon 865 flagship chipset. We are unaware of any other hardware specs of the Reno 3 at the moment.

As for ColorOS 7, it has made its official debut today in China. It brings along a simpler user interface, with light colors, refreshed icons, and a new font. Oppo has developed a new quantum animation engine for improved visual interaction and there’s a significant performance bump in tow as well.

ColorOS 7 also introduces a global dark mode (which Realme devices already have with ColorOS 6.1), Soloop video editor, Breeno voice assistant, and numerous other features. We cannot wait to see how Oppo has improved its new software skin and what surprises Reno 3 has in store for us. Will Oppo Reno 3 include a 120HZ display? Move back to 10x hybrid zoom? Or offer super-fast wireless charging support? We will find out really soon.