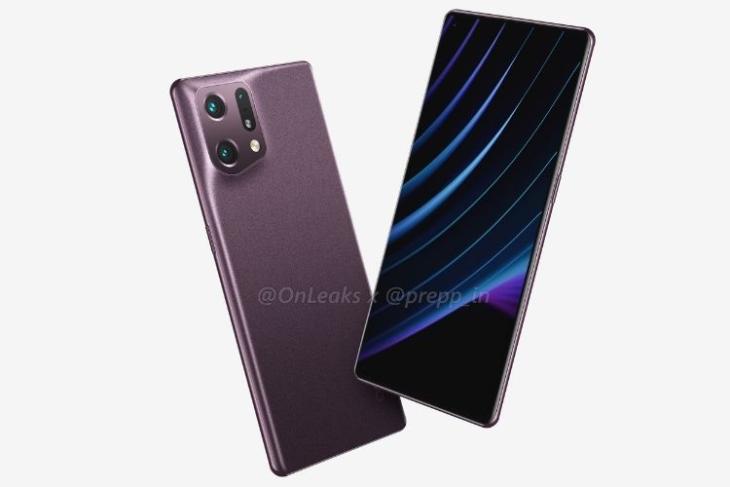 Oppo recently released its first foldable phone, the Oppo Find N and we can now expect it to launch the successor to the flagship Find X3 Pro soon. Prior to the official launch, which is expected in the first half of 2022, we now have the possible design of the upcoming Oppo smartphone. Check it out!

As per images shared by popular leakster OnLeaks (via Prepp), the Find X3 Pro successor is expected to come with the same corner-placed punch-hole screen. But what’s going to change is the back panel design. The phone is expected to steer away from the usual rear camera hump and go for an uneven rectangular camera bump.

It is seen housing two big and one small camera housings, along with separate flashlights. This feels like a step-down and the Find X3 Pro came with quad rear cameras. It seems like the company will ditch the microscope lens found on the predecessor.

It is further revealed that the phone will either be called the Find X4 Pro or the Find X5 Pro. Although, odds are in the favor of the latter, given that the Chinese consider 4 an unlucky number.

There’s no word on the smartphone’s official spec sheet, but we do have access to a few rumors and leaks. It is suggested that the alleged Find X5 Pro might get a 6.7-inch display, which could be possibly curved and be powered by the flagship MediaTek Dimensity 9000 chipset. We can expect it to get up to 12GB of RAM and up to 256GB of storage.

The camera department could house a 50MP primary camera, a 50MP ultra-wide camera, and a 13MP telephoto lens. There’s no word on the front camera configuration. Additionally. the device is likely to be backed by a 5,000mAh battery with fast charging and could feature an ultrasonic in-display fingerprint scanner.

Since these details aren’t concrete, we need to wait for an official word. We will keep you updated once we get more details on the same. So, stay tuned. Also, do tell us about your thoughts on the Oppo Find X5 Pro leaked design.