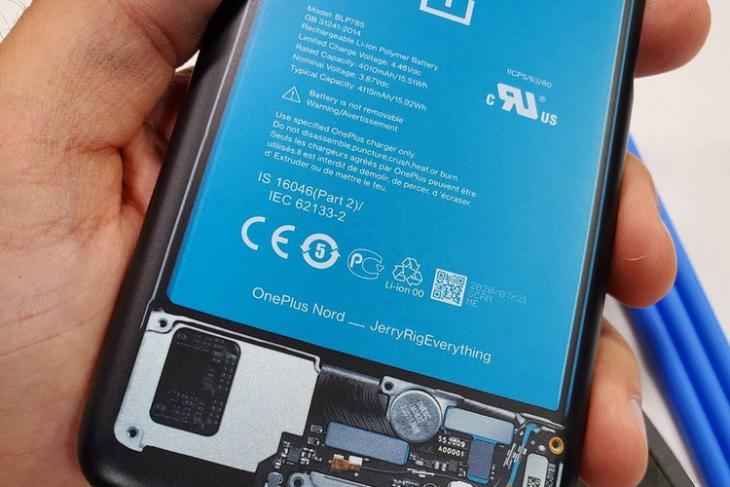 Last week, popular leakster Evan Blass took to Twitter to share the key specifications of OnePlus Nord. The handset was tipped to equip a 4,115mAh battery and now, OnePlus has confirmed it.

OnePlus has collaborated with Zack Nelson, better known as JerryRigEverything in partnership with dbrand for a special Teardown case. The YouTuber took to Instagram to tease the case, which revealed the battery capacity of the handset.

What's the #OnePlusNord got to hide? Nothing at all. That's why we teamed up with @ZacksJerryRig to produce this officially licensed @dbrand Teardown™️ case. Quantities are limited – get yours on July 21. #NordCreator

As is the case with all dbrand teardown skins and cases, the official OnePlus Nord Teardown case will show off the internals of the handset. It will be ideal for those who love transparent back without going through the hassle of modding it oneself.

The OnePlus Nord dbrand Teardown case will be available in limited quantities, starting from the 21st of July – the day when OnePlus will launch the OnePlus Nord along with OnePlus Buds.

Meanwhile, in an interview with YouTuber Marques Brownlee (MKBHD), OnePlus co-founder Carl Pei revealed details regarding the prototyping process of OnePlus Nord. The video also shows-off the teal color variant of the handset and confirms the absence of official IP rating.

The OnePlus Nord is likely to sport a 6.44-inch Full-HD+ Fluid AMOLED 90Hz display with a 20:9 aspect ratio and 2400 x 1080 pixel resolution. The device will feature Qualcomm’s Snapdragon 765G, with up to 12GB LPDDR4x RAM and 256GB storage. OnePlus Nord will retail in Blue Marble, Gray Onyx, and Gray Ash color variants.

If you’re in India, you can pre-order the OnePlus Nord later today at 1:30 PM through Amazon India at Rs.499. The company promises benefits worth up to Rs. 5,000 for customers who place the order ahead of the official unveiling.