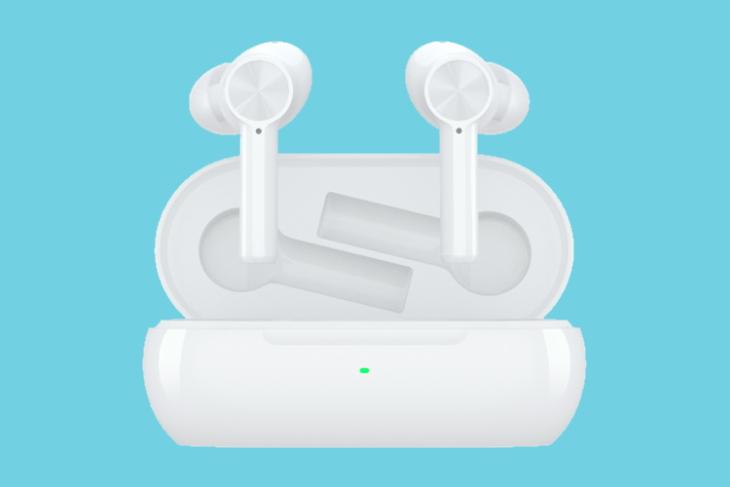 Alongside the OnePlus 8T, the company has been teasing the launch of its new truly wireless earbuds. They are rumored to be called OnePlus Buds Z, making them an affordable version of the original OnePlus Buds. These will be the company’s second pair of TWS earbuds. And ahead of the October 14 event, the official-looking renders and specs of the OnePlus Buds Z have leaked online.

OnePlus Buds Z renders have been extracted from an APK file shared with the folks at Oxygen Updater by an anonymous source. The renders show off both the earbuds and the charging case. The pill-shaped case is different from the AirPods-like case of the original OnePlus Buds. This looks very similar to the Samsung Galaxy Buds or Huawei Freebuds 3i case. You have an LED battery indicator on the front and a USB Type-C port and a pairing/ quick switch key on the rear.

The design of the earbuds is pretty similar to the original Buds, with the shiny ring on the outside and an elongated stem. You, however, have silicone ear tips (confirmed by OnePlus) for a more secure fit and better noise cancellation. The first-gen OnePlus Buds boast a half-in-ear design. Also, the header image shows that the earbuds will be placed horizontally in the case.

The rumored specifications of the OnePlus Buds Z have also surfaced online, thanks to popular tipster Ishan Agarwal (via 91Mobiles). The company has confirmed that these earbuds will weigh just 4.35 grams each and carry an IP55 rating for water and dust resistance.

OnePlus Buds Z is rumored to feature 10mm drivers compared to the 13.4mm drivers aboard its elder sibling. It will also support Dirac Audio Tuner and Dolby Atmos. The company will offer up to 5 hours of playback on a single charge, along with 15 hours more via the charging case.

This is great for an affordable version of the OnePlus Buds, which promises a total of 30 hours of playback. The Z variant will also support fast-charging, which will add up to 3 hours of playback with just 10 minutes of charge. What’s more, the company is also rumored to launch an upgraded version of its neckband-style earphones called OnePlus Bullets Wireless Z Bass Edition at the event next week.